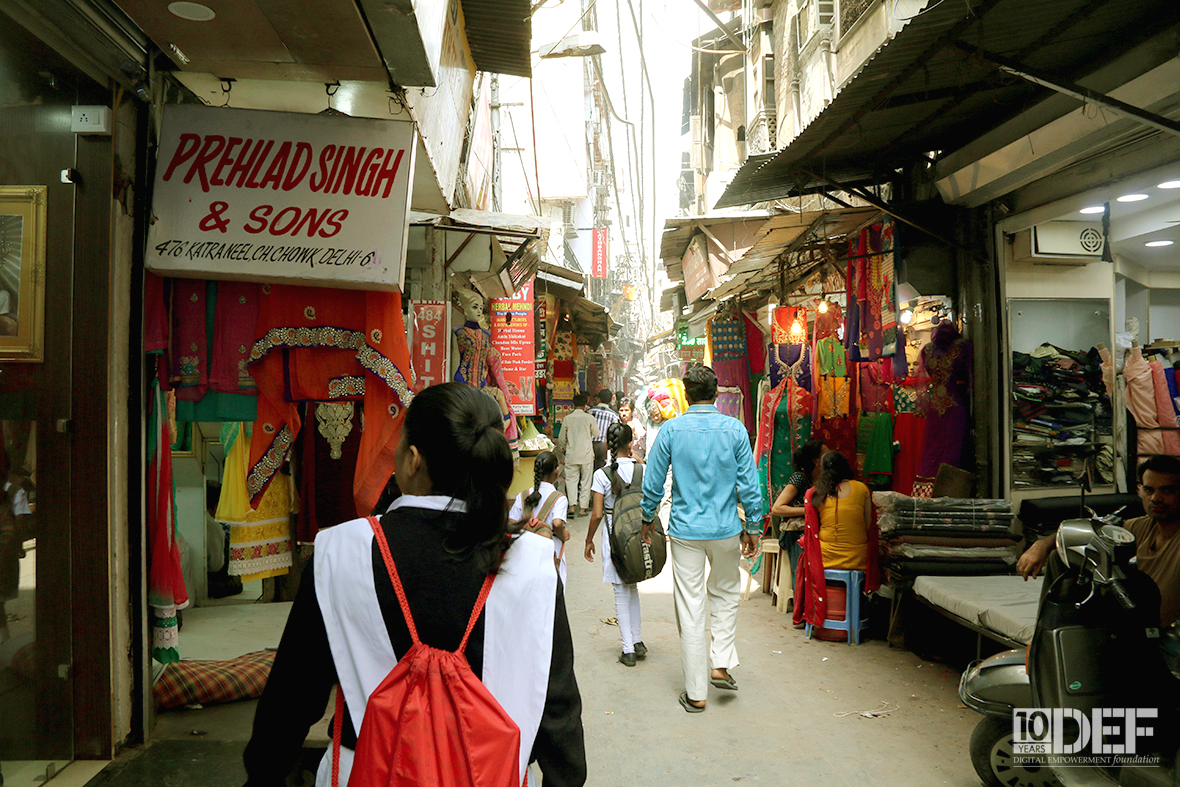 A katra is a cluster of houses and shops within a defined or undefined enclosed space. It is the smallest subset of a residential community. Most katras were actually massive havelis earlier. Even the lanes and by-lanes within a katra were originally not lanes but navigable spaces, leading a person from one party of the haveli to another.

When Shahjahan decided to establish his imperial city based on Agra model, several businessmen and craftsmen followed him to Chandni Chowk. The baniya community settled in Katra Neel named it after their god Neel Kanth Mahadev. Katra Neel was, therefore, a locality famous for indigo manufacturers and traders. Neel, a Hindi word, means blue and is used even today to denote indigo, the whitening agent.

The entrance to Katra Neel

Today, Chandni Chowk’s Katra Neel is a wholesale market for cloth. A well populated market, Katra Neel is known for a varieties of fabrics and clothes, its by lanes,  small roundabouts, Mughal era arches, cacophony and a thousand of colours that liven up the market.Known for menswear retailers, the first Raymond franchise of Old Delhi was established here. Besides menswear, one can also find shops selling lehanga, chunni, salwar suit. Close to Katra Neel is also a beautiful temple of Maa Kali (Goddess Kali).

Near Jama Masjid, next to the fish and chicken market, stands another mosque that is known as Machhli Walon ki Masjid. Katara Nizam-ul Mulk is behind this mosque, and traders live in this katra. Katra Nizam-ul-Mulk is named after a family of Nizams of Hyderabad. The katra was also known for Munshi Zahur-ul-hasan’s ‘qomi press’ but the place later became a fish market. The press used stone printing technique to print religious books but the building has now been converted into a guest house, and the printing press has been shifted to the current Urdu Bazaar.

Katra Lachu Singh is located close to Bhagirath Palace, the erstwhile mansion of Begum Samru, which today houses one of the largest electronics markets in India.

The word ‘mallah’ in Urdu means a boatman and, therefore, Katra Mallah was the residential colony of the boatmen of Shahjahanabad. Located very close to the Red Fort, which was the course of Yamuna at that time, the katra still stands with most of its structures from the Mughal era intact.

Katra Mallah saw an influx of new local inhabitants with the migration of old ones and a tense communal climate in the Capital during the Partition in 1947. Muslim residents from other areas flocked to the Muslim-dominated area of Shahjahanabad to seek refuge. While most Muslims from Katra Mallah fled at the time of Partition, to either Pakistan or their villages, those who stayed back opened their doors to the incoming refugees. A few old men living in Katra Mallah, who were little boys at the time of Partition, can still recall stories of how they reached Katra Mallah and how they’ve been living there ever since.

Furthering the concept of community living, Katra Mallah is owned by a person known as Mian Saab. While most of the residents have been living in the houses for generations, the entire katra is owned by one Mian Saab. The residents only know Mian Saab by the name that appears on their receipts when they pay a rent of Rs. 121 every month. Mian Saab has ordered for all the rent to go to the local Waqf Board, which is a charitable organisation that has the duty to use all the capital which is owned by the board for religious, social and charitable purposes.

Naaton was a local term used for road side gymnasts. Behind the Shree Wallan in Chandni Chowk, this katra was inhabited by gymnastics during the Mughal era. As the popular belief goes, it was believed that the ghost of naaton used to haunt the bael (the fruit) trees of the katra. Borrowing from this popular myth, Ruskin Bond wrote a story of a young Brahmin boy haunting the peepal trees of the area.

This katra in Chandni Chowk has been named after a temple that was built by a Maratha soldier named Apapan. The soldier once dreamt of a young girl who showed him a Shiva Linga and asked him to build a temple for her so that she could attain peace after her death. And so this temple was built and devoted to Gauri-Shankar. The Linga inside the temple is believed to be 800 years old. The ornate work and paintings inside the temple lend a deep sense of serenity, and the temple is considered extremely important as the road on which it lies today originally led to the Yamuna bathing ghats.

This katra in Chandni Chowk was named after a Begum of the 18th century. She was one of the wives of a nawab and even has a mosque named after her.

This katra was inhabited by the chobas of Chandni Chowk. The term ‘choba’ denotes iron smiths and iron traders.

Pyaarelal was a famous businessman of the late 19th and early 20th century who lived in Chandni Chowk. Pyaarelal was also one the earliest municipal councillors of Delhi and a great philanthropist who established several schools in the city.