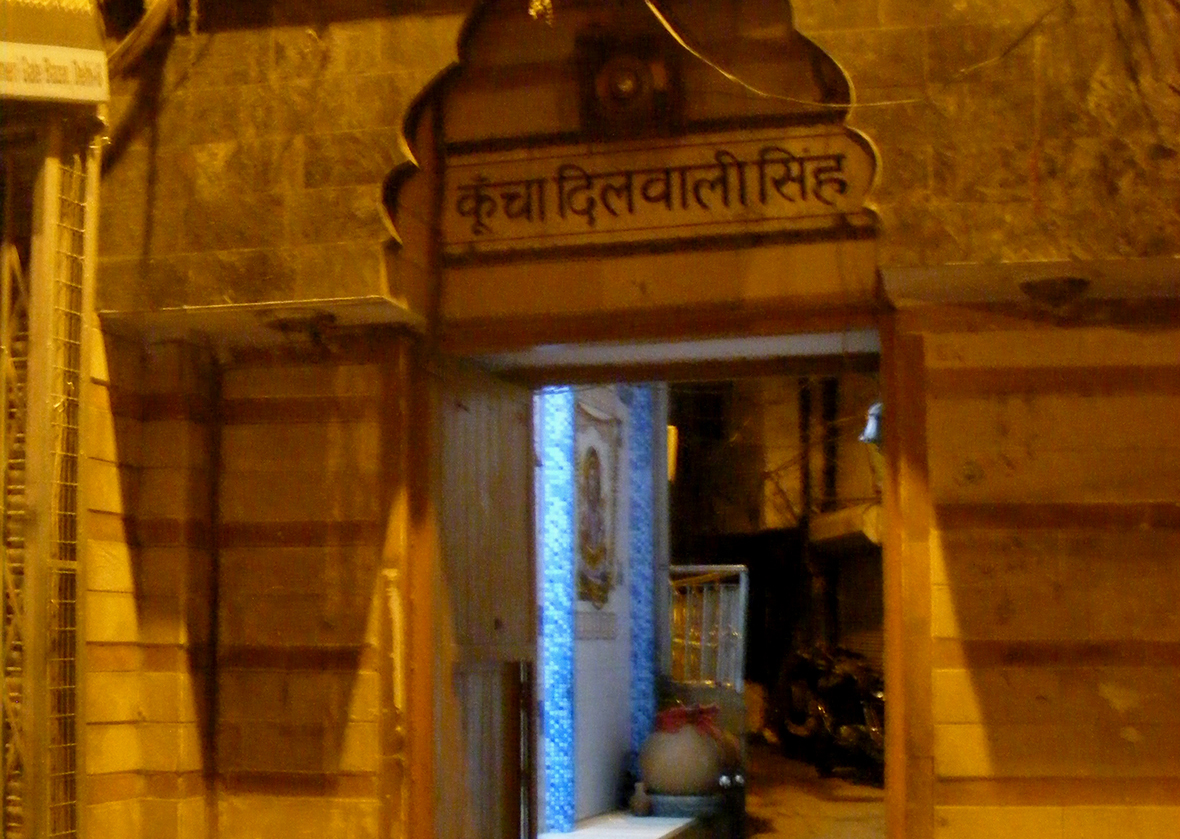 A koocha is generally a corner or a chauraha which serves as a common meeting place and leads to a katra. There can be several koochas in a katra. A koocha mostly has a lot of shops. Even today, most koochas are market places.

As one walks towards the Red Fort from Chandni Chowk, Kucha Mahajani can be found on the left side, close to Katara Natwa. Koocha Mahajani is not as crowded as the other koochas and katras of Old Delhi but it is known for shops selling gold, silver, pearls and other precious stones.

From a distance, the market looks like a huge mansion — who knows it might have once been a massive haveli. However, the old haveli — or what was probably later broken down into multiple havelis —of bygone era has now been transformed into multiple shops, that are well decorated to attract customers throughout the year.

Built during the Mughal period, this koocha can be located near the Lal Kuan (Red Well). The koocha is also popularly known as ‘Rahman ka koocha’ and a popular mosque, Masjid Anaar Wali can be found in this koocha.

As one walks in Chandni Chowk towards Fatehpuri Masjid, Koocha Ustaad Daag can be found just a little ahead of the Town Hall, on the left side. This koocha is a business hub because of the numerous shops selling cloth at wholesale rates. This koocha is also smaller as compared to the other koochas of Old Delhi as it’s limited to just two to three lanes. Over the years, a number of old havelis have already been transformed into godowns and shops, and the transformation still continues.

This koocha was named after a famous Urdu poet who spent his childhood in the Red Fort because his widow mother was married to a Mughal prince. Ustaad Daagh was known for correcting the Urdu compositions that were brought to him from far and away. When he died, a Benjamin Monroe wrote: “Ek daagh tha, so woh bhi toh muztar guzar gaya, baki bacha kya Hindustan mein” (There was a Daagh, now even he is no more. Now what is left in Hindustan?!)

Named after the nobleman Mir Hashim, who had a haveli here, this koocha is more famous today because it houses the mazaar (tomb) of Mirza Mazhar Jaan-e-Jaana, Ghulam Ali Shah, and other Sufis of the Naqshbandi order. The dargah complex, collectively, is called Shah Abul Khair.

Both Ghulam Ali Shah, and Mirza Mazhar were Islamic reformers of the 18th century. Mirza Mazhar was very popular among the mystic circles of Delhi. He kept a keen check on the political developments of the country, and was perturbed by the widespread sufferings and troubles in the second half of the 18th century. Mirza Mazhar lamented the misrule and maladministration rampant everywhere in the empire. He was aghast at the looting and pillage of the country by Ahmad Shah Abdali’s forces, the Marathas and the Sikhs. He pondered over the reasons for the decline of Muslim fortune in Hindustan, and because of his friendly relations with Imad-ul-Mulk, advised him on various affairs of the State.

The Sufi saints of Mirza Mazhar’s school of thought were trained in the teaching of mujaddid alf-i-thani, and they promoted Sufi Puritanism. Among his disciples was Shah Abdul Aziz, who had earlier studied the Hadith and specialised in the Sahih of Imam Bukhari. Shah Abdul Aziz was later appointed Khalifa to Mirza Mazhar.

The 18th century witnessed the consolidation of two distinct intellectual and spiritual traditions. One of them emphasised on wahadat us suhud (oneness of perception). It was sustained in the latter half of the 17th and 18th centuries, most particularly by Emperor Aurangzeb and by the work of Maulana Abdul Rahim (father of Shah Waliullah). This philosophy was defended with great success in the 18th century by the Sufi leader of Naqshbandiya Mujaddidiya, Mirza Mazhar.

Mirza Mazhar was a liberal in his time. Although a Sunni, he did not uphold the Shia-Sunni conflicts of his times, and wrote verses in Persian and Urdu in Ali’s praise. However, he was killed for his liberal views and his assassin remained anonymous. This created tensions between the Shia and Sunni communities. Eventually, Mirza Najaf Khan was held responsible, sighting political motives, wherein Mirza Mazhar’s popularity with the Rohilla Afghans was sighted.

Koocha Meer Hashim, a long and narrow koocha, is located between the Turkman Gate and Chitli Kabra. There are two mosques, a private school and a health clinic in this koocha, entrance to which can easily be missed. There is one other entrance to this koocha, and it’s through a house. It seems like the house has been built in the middle of the koocha’s path.

Daryaganj area has a number of koochas, one of them is Koocha Dakhni Rai. One end of the koocha leads to the Kala Mahal and the Pataudi House while the other leads to Koocha Chelaan.

Koocha Tarachand is located behind the Golcha Cinema Hall. This koocha known for a Hanuman temple, the construction of which dates back to more than 150 years.

Koocha Lalman is located on the main Daryanganj road, and can be seen on way to the Red Fort when approaching from the side of Delhi Gate. There is only one entry/exit to this koocha, in front of which is the Daryaganj Police Station. About 400 families, 90 per cent of them Hindus, live in this koocha which also houses a massive peepal tree and two temples.

A little ahead of Koocha Dakhni Rai on the main Daryaganj road is a smaller koocha known as Koocha Parmanand, which houses a temple known as the Gopal Nath temple.

Koocha Fateh-ul-Nishan Begum was established during the era of Mughal Emperor Muhammad Shah, and was named after the third daughter of Begum Nawab Kamruddin Khan.

Not much is known about this koocha other than the fact that it’s known among local for a Munshi Amujan’s haveli.

Alike Koocha Balaki Begum, not much is known about Koocha Gokul Shah either, except the fact that it houses the Hafiz Habibullah Masjid.

What is known today as Koocha Cheelan was originally part of a collective of koochas called Chahal Rasiya Koocha, a residence for the rich and socially established families of Old Delhi. Out of all the koochas under the Chahal, the koocha of ‘Cheelan’ became more famous than the rest and, therefore, the entire bunch of koochas came to be known by this name. Located in Daryaganj area, the elites whose mansions can be found is this koocha include philosopher Sir Syed Ahmad Khan and Dr. Asaf Ali.

To the right of Kamra Bangash and next to Koocha Chelaan is Faulad Khan ka Koocha. Faulad Khan was the son of Habash Khan, by whose name, Phatak Habash Khan is known. Faulad Khan’s brother was a nobleman in the court of Shah Jahan and had also been the kotwal (administration officer) of Delhi. This entire area was part of one of the havelis of Faulad Khan.

Koocha Subhash is a big epicentre of cloth markets of the city, and hundreds of bundles of cloth can be seen lying everywhere on the market street. It is located next to Koocha Ustad Daag.

Kucha Kabil Attar is located next to the Town Hall near Shahi Lal Masjid. It too is a big market of clothes, especially readymade clothes for women.

As one walks from Koocha Kabil Attar towards the Fatehpuri Masjid, one can spot Koocha Ghasi Ram on the right. Unlike most other koochas, which are garment markets, this koocha has godowns of wood logs and a few houses. Here, charcoal is also sold at wholesale rates.

After Guru Gobind Singh went for his Deccan campaign, his wife Mata Sundari Devi settled down in Delhi. However, when Nadir Shah invaded Delhi, she fled to Mathura. She returned later, and lived in the haveli of Bhai Jawahar Singh at Turkman Gate, which was converted into the Mata Sundari Gurdwara as it stands today by the Delhi Gurdwara Committee. It was from here that Mata Sundari Devi made Bhai Mani Singh the granthi at darbar sahib, Amritsar.

Koocha Lattu Shah, after the mystic Lattu Shah, was named thus because the mystic was fond of spinning tops. In fact, he was even honored for the performance of miracles in his days.

Sa-ad-u-lah Khan was the prime minister in Shah Jahan’s court, and the koocha has been named after him. The koocha also has the haveli that once belonged to the former Prime Minister of Pakistan, Parvez Musharaf.

The two koochas are in front of each other and have been named after two brothers. The brothers were nobles in the court of Mughal Emperor Bahadur Shah Zafar. Sarai Rohila is said to have been named after Rohul-ul-lah Khan. Once called Rohullah Khan Ki Sarai, its name has changed over time to Sarai Rohila. Their families left Delhi during the Partition in 1947, leaving behind just their havelis.

This koocha in Chandni Chowk, near Ajmeri Gate, is named after the maternal uncle of Guru Gobind Singh. Diwali Singh was a great friend and wazir to Mughal Emperor Bahadur Shah I. Every time Singh visited the city, he would shoot an arrow into the fort wall and make his presence known to the emperor.  The consorts of Guru Gobind Singh, Mata Sundari Devi and Mata Saheb Devi, also stayed in this koocha. Luckily for this koocha, when Nadir shah invaded Delhi, it managed to evade the bloodshed which was otherwise widespread in the city.

This koocha was a colony of perfume sellers who would sit on roadside and sell the itrs to passersby and other local residents.

This koocha was named after the women water carriers would stand outside the Jama Masjid, with water stored in waterskin (or mashak). They were officially made traditional water carriers from Mughal Emperor Shah Jahan’s time, and would jingle brass bowls to attract thirsty passengers. These sakhiyas played a major role during the revolt of 1857 when they offered water to thirsty and tired residents fighting against the British.

If we believe a particular rumour, the presence of sakhiyas actually dates back to the reign of Humayun. It is believed that a sakhiya once saved Humayun’s life and when he asked what the sakhiya wanted in return, she said she wished to be the ruler for a day. Humayun granted her this wish, and the sakhiya got his waterskin cut into square pieces to be issued as a currency for that particular day.