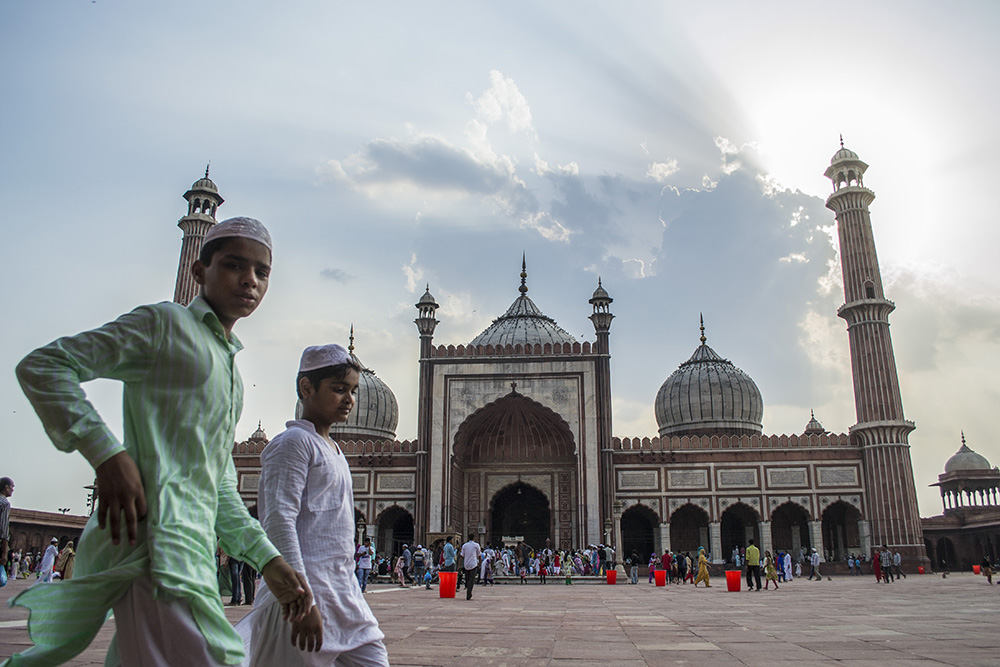 India’s largest mosque is one of the last monuments built under Mughal Emperor Shah Jahan’s reign. Its construction started in 1650 and was completed in 1656, after which it remained the royal mosque of the emperors until the end of the Mughal dynasty.

Estimations consider that the total cost of the mosque’s construction reached Rs. 10 crore, a sum which only comprised labour wages and didn’t include the building material. As per the custom of this time, the stones had been gifted to Shah Jahan by other kings, princes and noblemen. More than 5,000 workers were employed to achieve the construction of this huge monument.

There are several legends attached to the history of the mosque; one of them relates to the origins of Jama Masjid. It is said that some inaccuracies were made during the initial construction and that, once built, the mosque was not properly oriented towards Mecca. Thus, namaz could not have been performed in it and it would have been necessary to destroy and rebuild the entire mosque. In despair, Shah Jahan asked for advices and heard of a fakir (religious ascetic) working among the labourers who had the powers to solve the problem. Once Shah Jahan’s men managed to find the fakir among the 5,000 workers, the fakir went outside the mosque, leant his back against the wall and pushed it with his back. The mosque rotated to perfectly face the direction of Mecca.

Another legend says that when the Jama Masjid was first built, the expenditure on its construction was far less than that spent on the Red Fort. This, Shah Jahan thought, was unfair as the house of a man should not be more important than of the God, and so the emperor ordered that the Jama Masjid be reconstructed.

Apart from the myths attached to the monument, Jama Masjid was a major site for Shahajanabad’s history due to its importance for the Mughal dynasty. All the successors of Shah Jahan were crowned in this mosque and it was also the place of all royal religious ceremonies. A street, which has now disappeared, used to directly connect Red Fort’s Delhi Gate with the Eastern Gate of Jama Masjid. This later, also called Sirki Gate, was opened only for the emperor and his suite’s visit to the mosque.

Jama Masjid contains several unique pieces, including holy relics kept next to the Northern Gate. These include a beard hair of Prophet Muhammad, one pair of his sandals, a marble stone with the trace of his footprint, and a copy of the Quran written on deer skin by one of his contemporary disciples.

The Imam’s pulpit (minbar) next to the mirhab (a semicircular niche in the wall of a mosque that indicates the direction that Muslims should face when praying) also deserves a special attention as this fine piece of art has been sculpted in one single block of white marble. Moreover, it has been made in such a way that its base is situated exactly at the same height as the top of the Peacock Throne in the Red Fort to illustrate the superiority of the words of God over those of the emperor.

The Imams of Jama Masjid form a dynasty which is said to be continuous since Syed Abdul Ghafur Shah Bukhari, the first Imam appointed by Shah Jahan. This later was an erudite originating from Bukhara (currently in Uzbekistan), a very important centre of Islamic culture and knowledge in the entire South-West Asia in the 17th century.

Another legend relates to one of these Imams and to Sufi saint Sharmad Shaheed, whose grave is located just outside Jama Masjid, opposite the Eastern Gate. Sharmad Shaheed lived during the reign of Aurangzeb and was believed to have the power of reading people’s mind. During this period, the Imam of Jama Masjid was not fully dedicated to his faith though: he was flattering Aurangzeb in the hope that the emperor would recompense him with money to marry off his daughter. While performing the namaz one day, the Imam’s mind was focused on greed. In the middle of the ceremony, Sarmad stood up and said, “The thought of the Imam is under my feet.” Insulting the Imam was an immense crime at the time, thus Aurangzeb had him immediately arrested. According to the law, the sentence Sarmad was facing for his words was immediate beheading. But when the holy man was beheaded in front of Jama Masjid, his head went up to the sky instead of falling to the ground. Aurangzeb realised his mistake of not listening more carefully to the words of Sarmad, and asked his men to dig the ground under the place where Sharmad had been standing. There, all the treasure and jewels that the Imam had amassed were hidden.

The mosque faced more serious threats in 1857 when, as punishment for the revolt, British soldiers occupied Jama Masjid. During the siege over the next five years, the site was transformed into a military base, a stable for British army horse, and was denied its primarily function as a place of worship. Jama Masjid was not the only place facing occupation by the British army, as all major mosques in Shahjanabad were either destroyed or seized during this period. However, later these monuments were handed back to the Muslim community. Fatehpuri Masjid was the first one to be handed back but, rapidly, it became an important centre of anti-British conspiracy. Worried that the same might happen to Jama Masjid, the British controlled the designation of the wakf committee to make sure that they were on their side. Finally in 1962, the Imam was reappointed and Jama Masjid was handed back to the Muslim congregation.