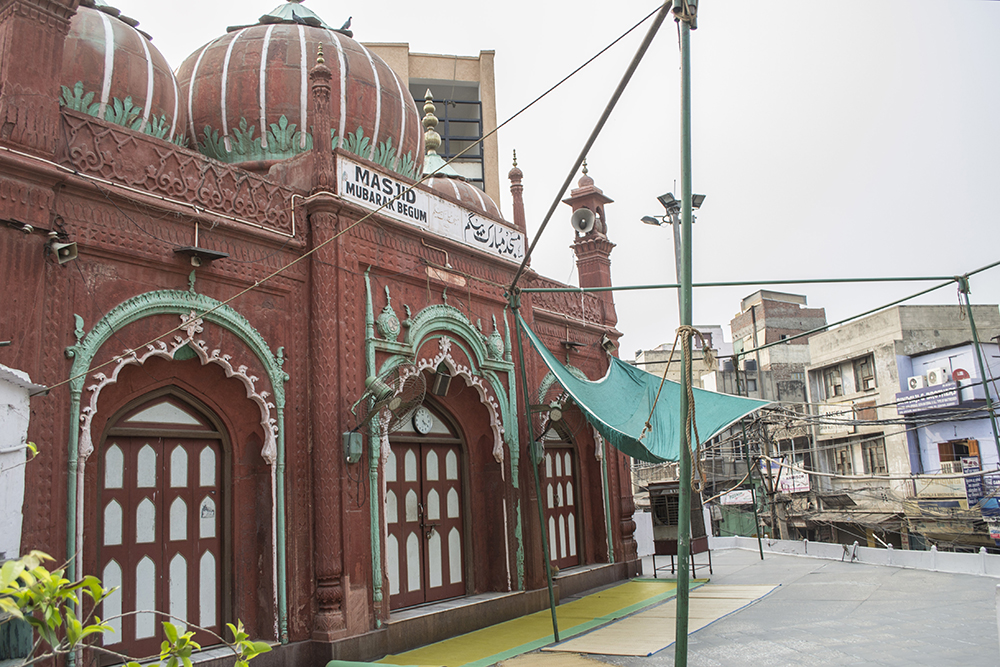 As one starts walking down Lal Kuan, passing a police station and a row of shops selling nuts, bolts, fittings and electric wires, one will see a red sandstone mosque rise up, almost out of the blue. The mosque has a marquee in white emblazoned on the centre, reading its name — Mubarak Begum Masjid.

The mosque’s appearance is all the more dramatic because it is situated on the first floor, a full two or three metres higher than all the shops surrounding it. Its ground floor is occupied by shops selling pipes and fittings. The mosque has a reasonably spacious courtyard, especially considering the fact that it is nestled in the midst of one of the most congested roads in all of Shahjahanabad.

Built in 1823, the mosque was named after one of the wives of David Ochterlony, a British resident in Delhi during the reign of Akbar Shah II. Ochterlony was a scandal in British upper class circles at the time for whole heartedly embracing the native culture of India. Ochterlony wore kurtas and pyjamas, smoked hookah and was enthralled by the charms of nautch girls, so much so that he even married one.

Ochterlony had thirteen wives. His favourite, allegedly, was Bibi Mahruttun Mubarak-ul-Nissa Begum, a Brahmin dancing girl from Pune who had converted to Islam.

A key figure in Delhi’s cultural life, the last mushairah of Delhi — with stalwarts like Ghalib, Mir, Zauq and Daagh in attendance — is said to have taken place at Mubarak Begum’s haveli in 1857, just before the British invaded Delhi.

Bade Mian ka Kheer – 20 or 30 paces from the Mubarak Begum Masjid and diagonally opposite the single screen Excelsior Cinema — is the Siddiqui family’s kheer shop. Started in 1870, around the same time when Germany was being unified under Bismarck, Siddiqui’s Bade Mian Kheer shop is now being run by a 55-year-old Jammaluddin.

Jamaluddin’s day begins at 5 am when he has to start preparing the first batch of kheer (rice pudding). Apart from the fact that the kheer substitutes jaggery for sugar, what separates it from any other kheer in Shahjahanabad is the time invested in it. Jammaluddin stirs the kheer for over seven hours on low flame (he doesn’t open his shop till 12 noon). As a result, the milk burns, tinging the kheer brown and a light crust of malai (cream) forms on top. The result is so tasty that it is hard to believe that this kheer hasn’t been banned yet (no really).

In his youth, Jammaluddin used to be a pehalwan (wrestler). Pehalwans, like all athletes, have a strict regimen and code of conduct. Jammaluddin would wake up at four and used to go for an early morning run on the grounds of the 219-year-old Anglo Arabic school, near Ajmeri gate.

Jamaluddin’s daily diet used to consist of 5 litres of milk and one whole bakra (goat). He says that he made it a point to never participate in kushtis (professional wrestling) because he believes pehalwani should remain a shauq (done out of passion) and must not become a profession. Now, many of the akharas (wrestling arenas), including the one in Koocha Pandit that Jamaluddin used to frequent, have been converted into apartments or shops.