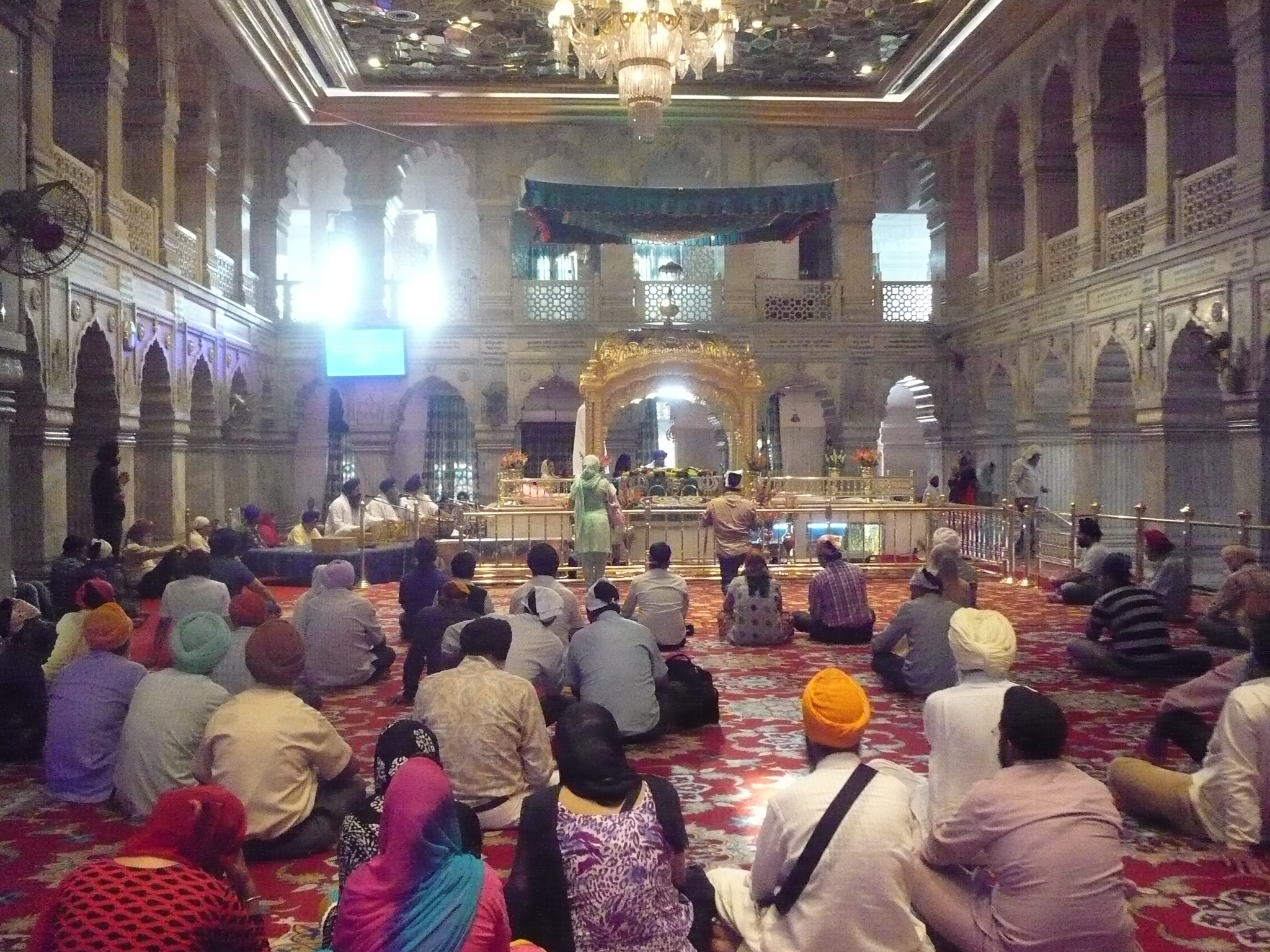 Gurdwara Sis Ganj Sahib is one of the 10 historical gurdwaras of Delhi. It is a place of high symbolic and religious significance for the Sikh community and, thus, constitutes an important site of pilgrimage.

The gurdwara commemorates the beheading of the ninth Guru, Tegh Bahadur, who was executed at this place on the orders of then Mughal Emperor Aurangzeb in 1675. This event is of particular importance for the Sikh community as it stands as a symbol of defense for the freedom of religion.

Aurangzeb, unlike the previous Mughal emperors, adopted a strict conduct of Islam and was particularly intolerant towards other religions. He forced many Hindus to convert to Islam and persecuted members of the Kashmiri Pandit community. In despair, the Kashmiri Pandits went to Guru Tegh Bahadur and asked him for help.

The Guru accepted to take their defense and told Aurangzeb that the Pandits would only convert to Islam once Aurangzeb would have him converted. Following this ultimatum, Aurangzeb immediately had Guru Tegh Bahadur captured by his soldiers and put in prison in Delhi, in the kotwali (jail) of Chandni Chowk. The Guru was given the choice to die or convert, to which he answered that he would never abandon his faith. In the following days, his disciples were tortured to death in an attempt to force him to change his mind. Bhai Mati Das was the first one to be killed. He was sawed alive and cut into two by Aurangzeb’s men. The next day, Bhai Dayala was boiled in a huge cauldron of water. The last disciple, Bhai Sati Das, was burnt alive. However, none of them, neither the Guru who had to witness these horrible deaths, abandoned their faith. A stone next to the Chandni Chowk fountain, opposite the gurdwara, narrates the martyrdom of these disciples.

In the gurdwara, an alcove right below where the Guru Granth Sahib is placed commemorates the place where Guru Tegh Bahadur was beheaded. The well where he took his last bath can also be seen next to the (now) shoes cloakroom. It is said that after the beheading, disciples of the Guru took his body to be cremated with proper rituals. Gurdwara Rakhab Ganj Sahib in Delhi was where the Guru’s last rites were performed on November 11, 1675.

The first construction of Gurdwara Sis Ganj Sahib dates back to 1783 when Sardar Baghel Singh invaded Delhi. This Sikh military leader marched into the Mughal Capital and attacked the Red Fort with an army of 30,000 horses and men —  the name of the area Tis Hazari (30,000) would refer to this episode, as it is said that the troops of Bagel Singh camped at this place before attacking the Red Fort. Surrounded by the Sikh army, then Mughal Emperor Shah Alam II set a compromise with Baghel Singh: the Sikh military leader received an important share of the city’s taxes and was authorised to build gurdwaras at Sikh’s holy sites in Delhi. From this episode stem the origins of Delhi’s 10 historical gurdwaras, including Gurdwara Sis Ganj Sahib in Chandni Chowk.

However, the Sikhs didn’t plan to settle in Delhi, and the entire army left shortly after the construction of the gurdwara was completed. Once the Sikhs returned to Punjab, the Muslims took back control over Old Delhi, destroyed Gurdwara Sis Ganj Sahib and established a mosque instead.

After the revolt of 1857, the Sikh King of Jind (Haryana) took up the matter and tried to influence the British to allow them to rebuild the gurdwara in Chandni Chowk. After several disputes between Muslims and Sikhs, the case finally went to the court of London, which ruled in favour of the King of Jind in the late 19th century. The present structure of Gurdwara Sis Ganj Sahib was built in 1930.

As is the case in every Sikh temple, there is a kitchen attached to Gurdwara Sis Ganj Sahib as well. It provides food for free to visitors, irrespective of their religion or caste.

Before 1960, the building that now serves as the kitchen used to be a kotwali (police station). The history of this kotwali goes back to the 17th century as well as it was the place where Guru Tegh Bahadur was imprisoned by Aurangzeb before his beheading.

Famous Urdu poet Mirza Ghalib is also known to have spent some days within the walls of this kotwali. The poet, who used to play cards in front of his haveli in Old Delhi, was arrested one day for gambling and brought by the police to the Chandni Chowk Kotwali where he was kept imprisoned for a few days.