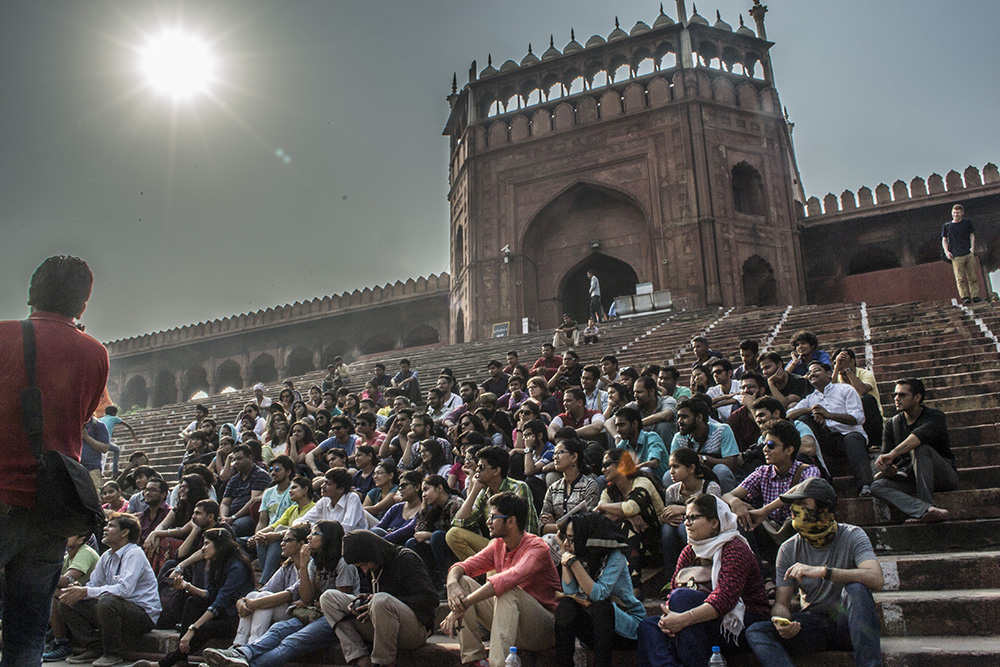 It was early Sunday morning (8 am on October 18, 2015) and Team DEF was waiting at Chawri Bazaar Metro Station Gate No. 3 for an expected crowd of about 50-60 participants to arrive and register for a walk organised by the eHeritage Project — Heritage Walk: Tracing Dilli ki Tehzeeb.

The original plan of the day was to walk through Chawri Bazaar while discussing the courtesan culture of Dilli, then move towards Ballimaran to unravel the stories of ‘Dilli ke Baanke’, the life of poets like Ghalib and Daagh Dehlvi, and the tradition of kabootarbazi — throughout tracing Dilli ki Tehzeeb.

However, within 15 minutes, 60 people had gathered and by 8:30, there were 125! The numbers were so overwhelming that the organising team had to put Plan B in action. The participants walked from Chawri Bazaar Metro Station to the Jama Masjid, and sat on the stairs to listen to Asif Khan Dhelvi, founder of Delhi Karavan, narrate stories about Dilli ki Tehzeeb with the focus on culture of courtesans, Delhi’s youth, mushaira and the mutiny of 1857. Asif also compared this tehzeeb with that of Lucknow and discussed how things are different today.

The word ‘tehzeeb’ refers to not just a cultural practice but encompasses an entire way of living in itself. Tehzeeb concretised over great many years, and it continued to evolve as differing customs and practices fused together through interaction of people from different regions. While sitting on the steps of Jama Masjid, Asif guided participants’ imagination — in Zabaan-e-Dilli (Urdu and Hindi) — through the lanes of Chawri Bazaar, Ballimaran and Gali Qasim Jaan.

Following the baithak at Jama Masjid, Asif led the participants through Ballimaran and to Ghalib’s Haveli where he answered questions of curious participants about the history and heritage of Shahjahanabad (Old Delhi).

We’re extremely thankful to the participants who came for the event and made it one of the most energetic and popular heritage walks of Delhi. We would also like to thank our volunteers for managing and coordinating the event so smoothly, even as the participants marched from the Jama Masjid to Ballimaran through the ever-crowded Hauz Qazi Chowk during the market hours.

The e-Heritage Project: Digitally Enhancing India’s Heritage is an initiative of Digital Empowerment Foundation and UNESCO India. Photographs from the event can be found here.