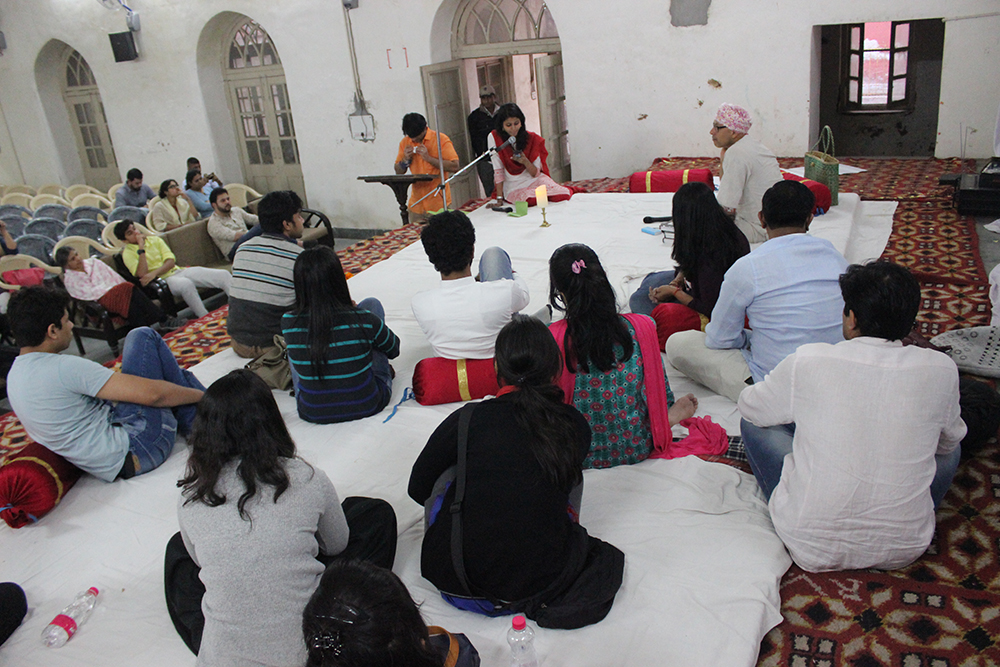 The culture of mushaira held quite a significance in Old Delhi in the pre-Independence era. In fact, mushaira were very popular during the reign of the last Mughal emperor Bahadur Shah Zafar II, who was a poet too. He would often initiate gatherings of other renowned poets like Ghalib, Zauq and Mir to recite verses. Today, however, the mushaira culture has largely faded.

Bazm-e-Shahjahanabad was, thus, organised as an evening for the promotion of Urdu poetry and the historical culture of Old Delhi among today’s youngsters. The event was organised in Anglo Arabic Senior Secondary School at Ajmeri Gate, Old Delhi, on November 22, 2015.

The decision to organise the event at the school was quite unanimous. When we first saw the school, we knew there could not be a better place to organise an evening of Urdu poetry. The Anglo Arabic Senior Secondary School is one of the oldest schools of North India. It was founded in 1696 by Ghaziuddin Khan Feroze Jung I, a general of Mughal Emperor Aurangzeb, a leading Deccan commander and the father of the first Nizam of Hyderabad. The campus of the school is spread across several acres and additionally houses the a boys hostel, a madarsa, a private school, a women’s polytechnic, a beautiful mosque, a dargah and the grave of Ghaziuddin with the campus’ boundary. It is said that renowned (and proud) poet Ghalib was offered a job at this school. However, he declined the offer because when he arrived at the school in a palki, the then principal of the school did not come to receive him at the gate.

Bazm-e-Shahjahanabad was divided into three segments. The first session, Dilli ki Tawareekh aur Shayari, was led by eminent economist and passionate Urdu poet Amir Ullah Khan who took the audience through a journey of Urdu poetry in Shahjahanabad, spoke about the many poets it has produced, and discussed the difference between the Urdu poetry of Delhi and Lucknow.

Digital Empowerment Foundation Founder-Director and a fan of Ghalib, Osama Manzar, took the next session, Ghalib ke Khatoot. Though everyone knows about Ghalib, the poet, very few know that he had a unique style of letter writing. In that age of postal service, Ghalib wrote letters that when received and read, it felt as though the sender was sitting in front and talking to the recipient of the letter. Ghalib’s style of letter writing was extremely conversational and contemporary. Manzar, in fact, called Ghalibs letter-writing ‘Twitterbazi’. Enumerating some interesting facts about Ghalib, Manzar informed that the poet wrote 849 letters in his lifetime. Most of these letters were not addressed by name but were simply addressed to people he referred to as “sahib” or “jaan“. Manzar read out several of these letters from books he has collected over the years.

The last session of the evening, Sher-o-Shayari, was moderated by Delhi Karavan founder and history enthusiast Asif Khan Dehlvi. Dehlvi opened the floor to the audience to share their poetry with the rest of the crowd. Prabhat Chaturvedi and Atif Khan recited several of their beautifully written couplets on love, longing, tehzeeb, and the society. Asif Khan too shared some verses on Old Delhi that he has written while Aanchal read out a very emotional and poetic letter written by a woman to her beloved for whom she is longing. After a short interaction on what shayari meant to each audience member, Anuradha Pathak ended the evening with a mesmerising ghazal.