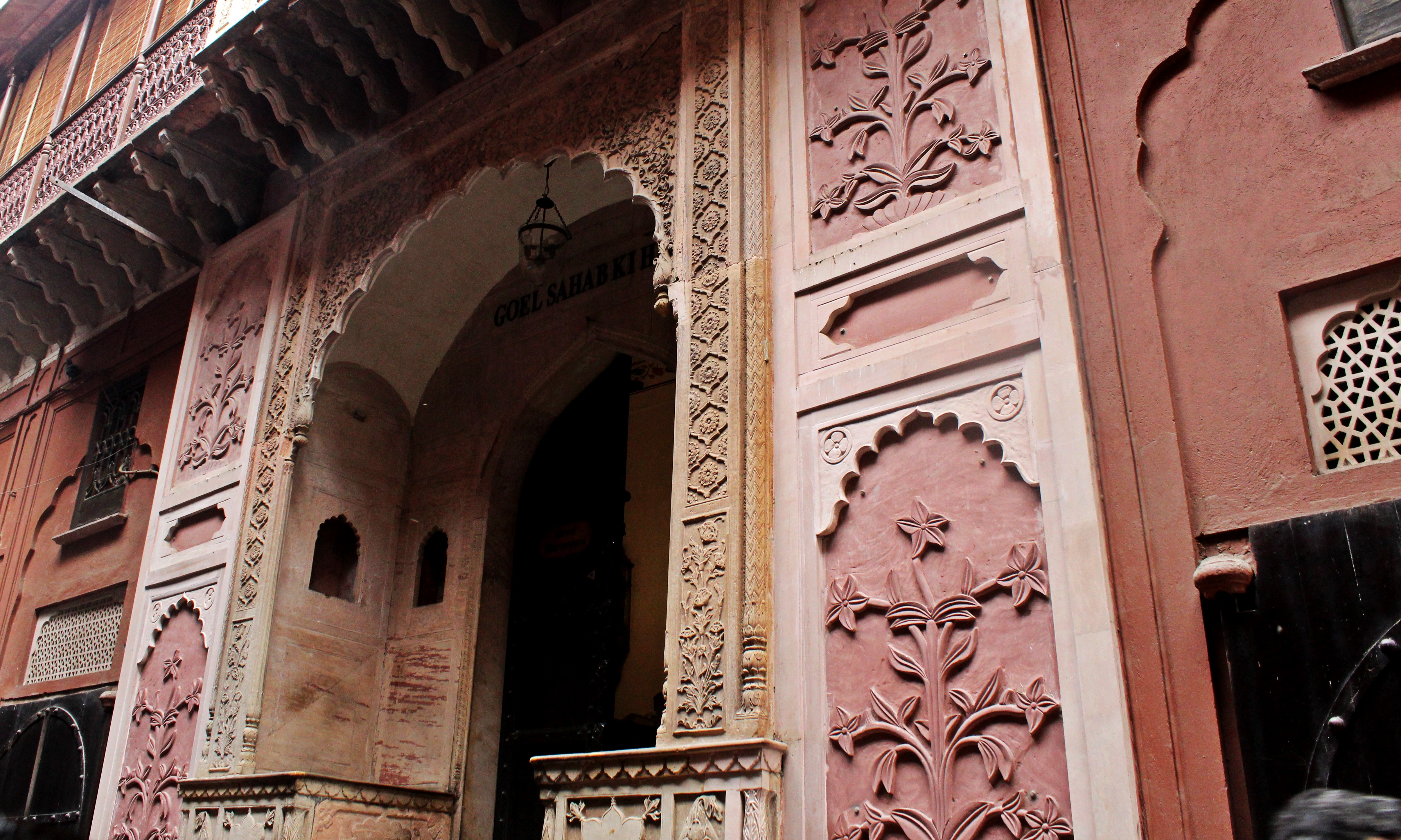 Chandni Chowk is one of the oldest and loudest markets of Old Delhi. Chandni Chowk is a confluence of flavours, effervescences, vendors’ jargon, historic architecture and curious, inquisitive tourists meandering through the lanes of old Delhi.

Amidst these narrowest alleys of Chandni Chowk, stands the gigantic, overbearing and yet beautiful Haveli Dharampura. The alley that leads to this 19th century is famously known as “Krishna Gali” and is probably the narrowest of all the alleys; one can only visit by foot. One can find some prominent religious buildings surrounding the haveli, including Jain temples.

Situated in the vicinity of Jama Masjid and accessible via the Gali Gulian, Haveli Dharampura was built in 1887 during the late Mughal era in the erstwhile fortified city of Shahjahanabad. The architecture of the building resembles a fusion of Mughal, Hindu and European styles. Havelis were the pride of the Mughal dynasty. These iconic structures displayed the valor and fiscal strength of the Mughals and the former aristocrats. These havelis, of which handful are left standing today; either in dilapidated condition or neglect, back then dotted Old Delhi and held prominence and over Chandni Chowk and were considered as precious jewelry of the Mughal dynasty.

Haveli Dharampura was no exception.

It followed a mixed-use pattern meant for residential as well as commercial purposes with the ground floor consisting of several shops and the upper floors had houses. The haveli was overtaken by the British and later left to crumble to ruins.

Restored to its yesteryear prominence, by Vijay Goel and his son Siddhant Goel, the haveli, now renamed as ‘Goel Saab ki Haveli’ has drawn the wandering gaze of tourists and astonishment of locals, since almost 200 years.

The history of the haveli and its secrets still remain a mystery but parts of it can be unravelled by stitching together the accounts of shopkeepers and other locals that surround the Haveli.

Yet narratives that pan centuries, often find unsynchronised retelling. Stitching together the story of the dharampura haveli also finds various retelling of accounts, with altering speculations and facts. Some say it used to be a residential place of a traditional family who left the building because of reasons unknown, resulting to a crumbling façade and creaking foundation, till it was transformed into a grand hotel a few years back. It now serves as a heritage site attracting both national and international tourists.

According to a local vendor, Ram Prakash, the structure has seen many modifications such as the 4 gates adjacent to the main gates, which are newer additions whereas the main gate has remained untouched since years. Along with the new gates, some of the carvings on the walls have also been modified. An additional floor has also been added from where one can have a gorgeous view of the Old Delhi Railway Station, Red Fort and Jama Masjid.

The haveli now operates as a hotel, a heritage site and a tourist spot with an entry of INR 350.

A lot has changed in the Haveli and with time testimonies will either applaud or criticize the changes. But it is true that this historic building was in dire need of a revival and conservation of its story.

Even today, Haveli Dharampura remains as a place of wonder for many, attracting the wandering gaze the heart yearning for some old Delhi charm.

Antara Mandal and Rahul Bhojwani have contributed to this page.