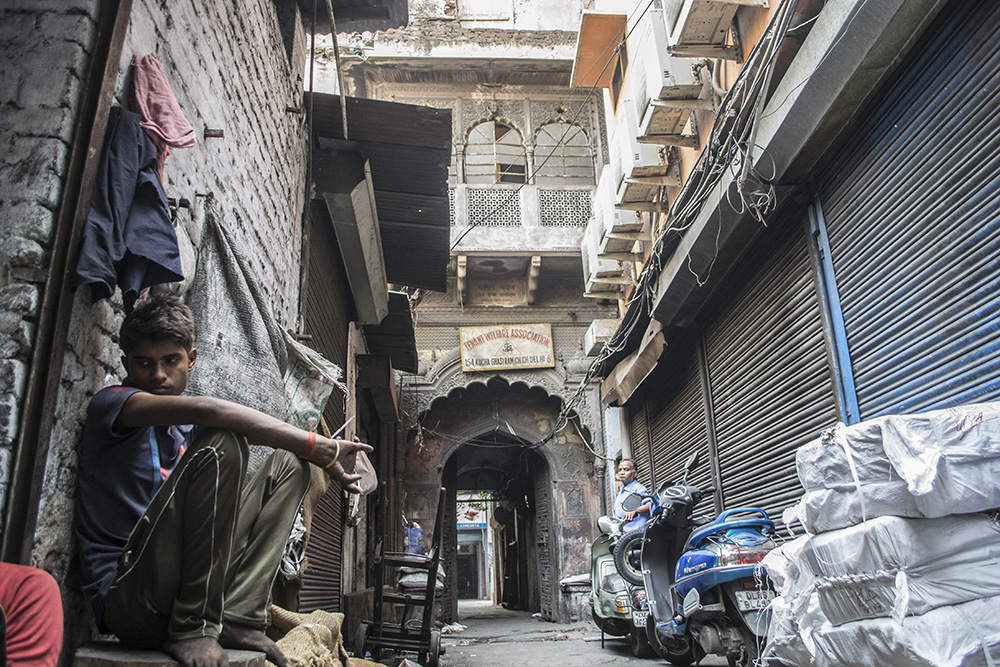 Located in a narrow alley where one is immediately engulfed by coal dust, is a haveli that is known for all the wrong reasons.

A present resident of Namak Haraam Ki Haveli, Ashok Agarwal, tells that Lala Bhawani Mal Khatri was a businessman of the 19th century who often passed secret information from the Mughals to the British and from the British to the Mughals. This betrayal gave him the name of a ‘namak haraam’ (traitor). Locals despised him, and refused to pay him the respect he demanded.

Ashok Agarwal, one of the present resident of Namak Haram ki haveli

Legend has it that Lala Bhawani Mal Khatri asked the British to issue an order stating that no one should call the former a ‘namak haraam’. The British even issued this order but the locals refused to abide by it, and the name Namak Haraam Ki Haveli stuck through the centuries.

Years later, the haveli was occupied by another family who placed a stone over the gate of the haveli, which read ‘Basal Bhawan, 154 Kucha Ghasi Ram’. However, this man was never the rightful owner of the haveli.

Today, the haveli has been broken down into several shops, and only a small part of the haveli is still used for residential purposes. Unfortunately, not even every shopkeeper in the lane knows that they are situated adjacent to the once grand and infamous haveli.

There are two entrances that lead to this haveli. One from the side of the Fatehpuri Masjid and other that enters into the Phool Wali Gali (Flower Lane). The residential remains of the haveli are owned by a Govind Prasad Bansal who also has his crockery godown in the complex, which houses about 14 flats on the first floor around an open courtyard. Rumour has it that there used to be a tunnel under this courtyard — which was covered in cement only a few decades ago — that led to the Red Fort. Locals try to prove this point by narrating a story from 1965 when a fire partially engulfed this complex due to which the courtyard, “which was hollow beneath”, sank.

Besides the stone-arched gateway, carvings on the wall and a few wooden doors, little of the original haveli remains intact today. Most of the residential structure has been renovated for the convenience and safety of the inhabitants. Even the kachchi sadak has been converted into a proper road.

Besides these residential flats, about 60 to 70 rooms of the haveli on the road in front of the residential complex have been converted into shops or godowns, mostly dealing in coal and iron. The original wooden doors of these rooms have been replaced with iron shutters while the wooden ceiling that was fixed in the 19th century still remains untouched — by humans or termite. There is also a baoli (step well) in this part of the haveli but it has been converted into a godown, which is inaccessible to the general public.