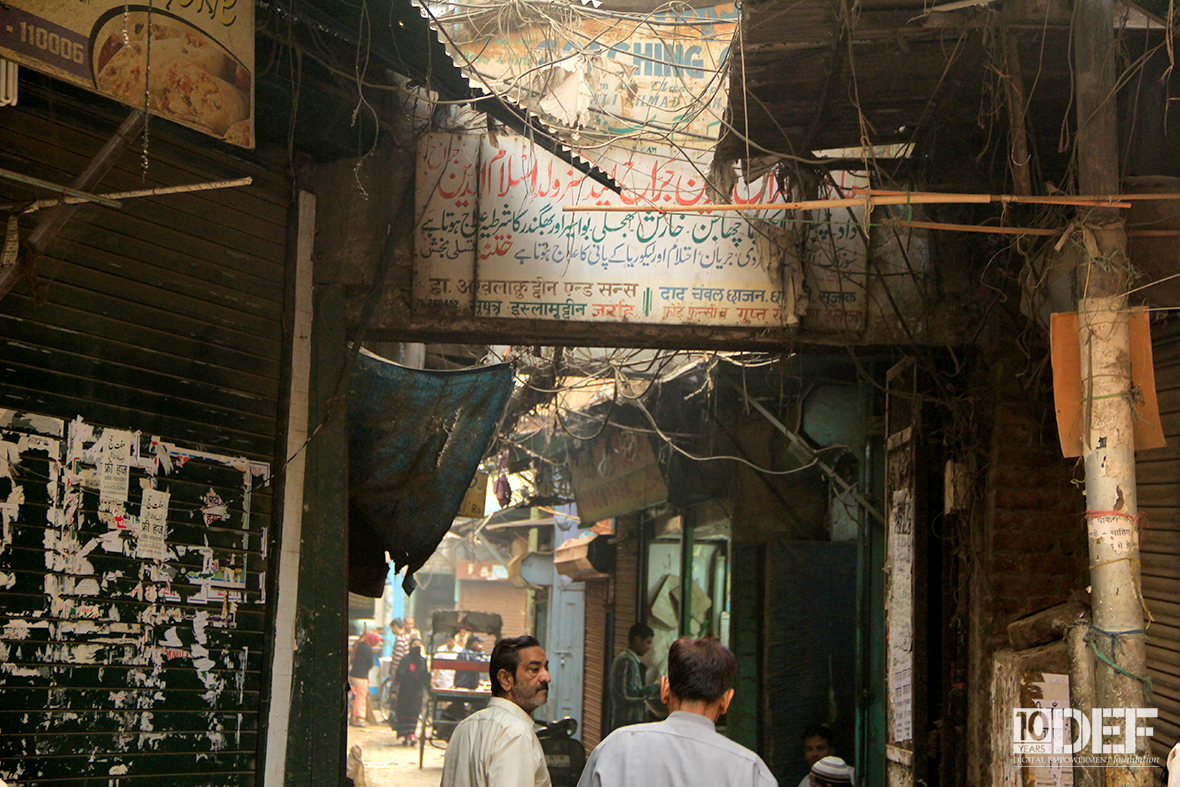 Walking from the Jama Masjid towards Chitli Qabar Chowk, one would think that Haveli Azam Khan would be like any other traditional haveli or maybe even like Chunna Mal’s haveli. But one would be wrong. This haveli, which was once gifted by a Mughal emperor to his loyal server Azam Khan, has now turned into a home for 10,000 people.

To the left of the chowk, is a small green gateway, which leads to a street that houses a 90-year-old sweet shop. It is believed that the shop and a large area around it was once a haveli. However, the present-day owner of the shop has no knowledge about any such haveli.

The once grand haveli now also houses a sweet shop besides hundreds of houses.

In fact, there is almost no trace of the haveli anymore. This is because the haveli has been broken down into 10 streets, a hundred shops, at least 150 houses, four mosques and numerous shops.

Just across the sweet shop, is a barbershop (Shop no. 699) run by Mohommad Idrees whose grandfather established it in the 1960s. Next to it is a 50-year-old tea shop. But what steals the limelight is ‘Pehelwan ki Dukan’. The shop is a family business and has been there for the past 300 years, providing medication for pain, injury and sprain to locals. A few steps ahead of the barbershop is another clinic, run by the fourth generation of a doctor family.

What’s interesting about the area called is the makes lanes that make up Haveli Azam Khan today —Gali Hakeem Sharifuddin, Gali Pir Ji Wali, Gali Ahmed Shah, Gali Godon Wali, Gali Farash Wali (also called School Wali Gali as there is a school located in the lane), Gali Mochiyaan and Gali Azam Khan. There were three more lanes but they have not been named. In these lanes are Kuen Wali Masjid, Anar Wali Masjid, Bambai Wali Masjid and Chhoti Masjid.

The General Secretary of Haveli Azam Khan RWA, Rais Ahmed, says that at the time of the 2014 general elections, there were more than 4,000 registered voters amid an estimated population of 10,000 plus.

The present-day status of the haveli has both positive and negative impact. It’s disappointing that the once-must-have-been-glorious haveli has been broken down into several houses and shops to fulfill the greed of Azam Khan’s descendants and subsequent residents of the housing units. On the other hand, one massive mansion has been able to provide home to nearly 10,000 people.