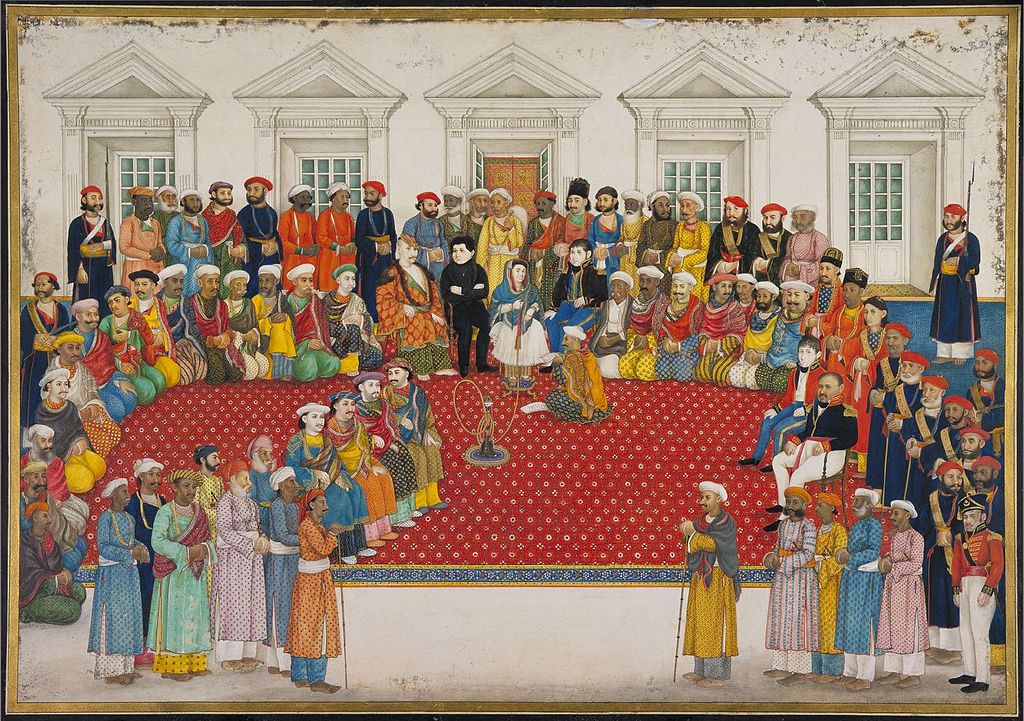 Why do you ask my native place,
O dweller of the East,
Making mock of me for the poor plight I am in?
Delhi, which was once the jewel of the world,
Where dwelt only the loved ones of fate
Which has now been ruined by the hand of time,
I am a desolate resident of that storm-tossed place.

The profession of being a mercenary was an accepted one in Europe, especially post the bloody Seven Years of War which ended in 1763. Alongside the English, French and Dutch ventures in East India Companies, the Austrians too had their own endeavour. Although this was never too successful, the tradition never ceased to be.

Born to Martin Butzerin in the village of Silbertal, Walter Joseph Reinhardt followed the mercenary tradition and boarded a vessel to Pondicherry, a major French colony in the south of India. However, post the Seven Years’ War, the French had almost given up on their business ventures in India and employment was not very lucrative in India’s south. Reinhardt then made his way to Bengal which had recently fallen to the British and joined the forces of Mir Qasim, the then titular Nawab of Bengal, where he was granted charge of two battalions by Gurgan Khan, an Armenian from Calcutta. Mir Qasim was not happy with the British domination and set siege on one of the Patna factories of the East India Company. He announced that war had been declared and it would be within his rights to kill any Englishman wherever they were spotted. But the Nawab’s forces refused to kill defenseless people. It was here, in such a situation, that Reinhardt who was in charge of the artillery, set an example by killing a few men himself.

Unfortunately, the Nawab’s forces were defeated, and both Mir Qasim and Reinhardt took refuge in Awadh, from where Reinhardt made his way to Hafiz Rahmat Khan of the Rohillas, moved towards Delhi and Agra, and rendered his services to the Jat chief of Deeg, Raja Jawahar Singh. He participated briefly in the Battle of Buxar, where the combined forces of Shuja-ud-Daulah and Mir Qasim were defeated. Reinhardt who had by then changed his name to Sommers to gain greater acceptability amongst his employers, was a wanted man. It was under such circumstances that the gray haired, 45-year-old foreigner reached the city of Delhi.

Farzana was a girl of Kashmiri descent born to Asad Khan and his concubine, whom he had brought in to the Qasba of Kutana, 80 kilometres from Delhi. However, post the death of the father, the concubine’s step-son disowned the mother and daughter, who then made their way back to where it had all begun.

Delhi was then experiencing what was known as ‘Gardi ka Waqt’. Nadir Shah, Ahmad Shah Abdali, and finally Ghulam Qadir Rohilla had ransacked the city, taken away its riches, and left the coffers empty. It was in such a troubled time that mother and daughter reached the Kashmiri Darwaza of Shahajanabad, the mother had fallen terribly ill and she breathed her last on the steps of the Jama Masjid, the refuge for the pious. Luckily for young Farzana, Khanum Jaan, a tawaif from Chawri Bazaar who had trained her mother before Asad Khan had taken her, happened to pass by in her palanquin and noticed the young girl. She had a pearly white complexion and a radiant face. Khanum Jaan took it upon herself to train young Farzana who then grew up to be a graceful courtesan. She was trained in Kathak, was witty and very popular among Delhi ke Baanke.

(Delhi ke Baanke were like the knights of Britain or a group of men — with long moustaches —who protected the poor from atrocities against them.)

Then one evening came the news of the arrival of a foreigner who spoke the Moorish tongue (Urdu) and Persian with a heavy accent. Although he was a wanted man, the tehzeeb of the courtesan made Khanum Jaan welcome General Sommers and put up the best show her kotha could offer. It was here that Farzana caught Sommers’ eye and he took her as his wife, second after Badi Bibi.

After she was married to Sommers, Farzana came to be known as Begum Samru. Begum Samru was said to be a fiery woman who had four battalions under her control post her husband’s death in 1778. She was granted the title of Zeb-un-Nissa or the ‘Jewel amongst women’ by Shah Alam for her services to him. She protected Delhi from Sikh raiders, numbering 30,000 under Baghel Singh in 1783. In 1787, she and 100 men of her forces opened fired on Najaf Quli Khan’s forces, following which a Peace Treaty was arrived at between the Badshah and Najaf Quli Khan. It was after the signing of the treaty in 1787 that Begum Samru gained the jagirdari of the Sardhana estate from the old emperor, who was very pleased with her services. She retained the Estate even post the British takeover of North India in 1803. She ran her estate both from the Walled City of Delhi — where she had a palace — and from the country Estate itself. She was said to host lavish feasts at her palace and has sometimes been said to have dabbled in witchcraft.

Begum Samru converted to Christianity in 1781. She was rechristened Joanna Nobilis. Her court at Sardhana was a mixed race population, and she the only Christian monarch to have ruled in India. She was referred to as a sort of ‘Taj Mahal’ that every foreign mercenary visited when in India.

While Begum Samru was the jagirdar of Sardhana, her closest companion was Begum Umdaa, who belonged to the other jagirdari family of Sardhana. When Begum Samru died, she was denied a burial at the Sardhana church due to her Muslim ancestry. However, a monument was built on a land granted by Begum Umdaa and her husband Zafte Khan. Begum Samru, who had started off as a nautch girl, ended her life as the owner of an estate in the fertile Doab plains, and a palace in the heart of Chandni Chowk, well loved, well known, the Zeb-un-Nissa of her times.

About 20 years after her death, during the revolt of 1857, her palace in Chandni Chowk was ransacked and partially destroyed. It is now called Bhagirath Palace, named after the last owner. The building is also partially owned today by the State Bank of India, behind which is a large electronics flee market. The palace, originally built inside a garden granted by Akbar Shah, is hard to identify from the days of its past splendour. A spree of hawkers, and narrow galis is all that remains, while the palatial building has been divided among various residents.