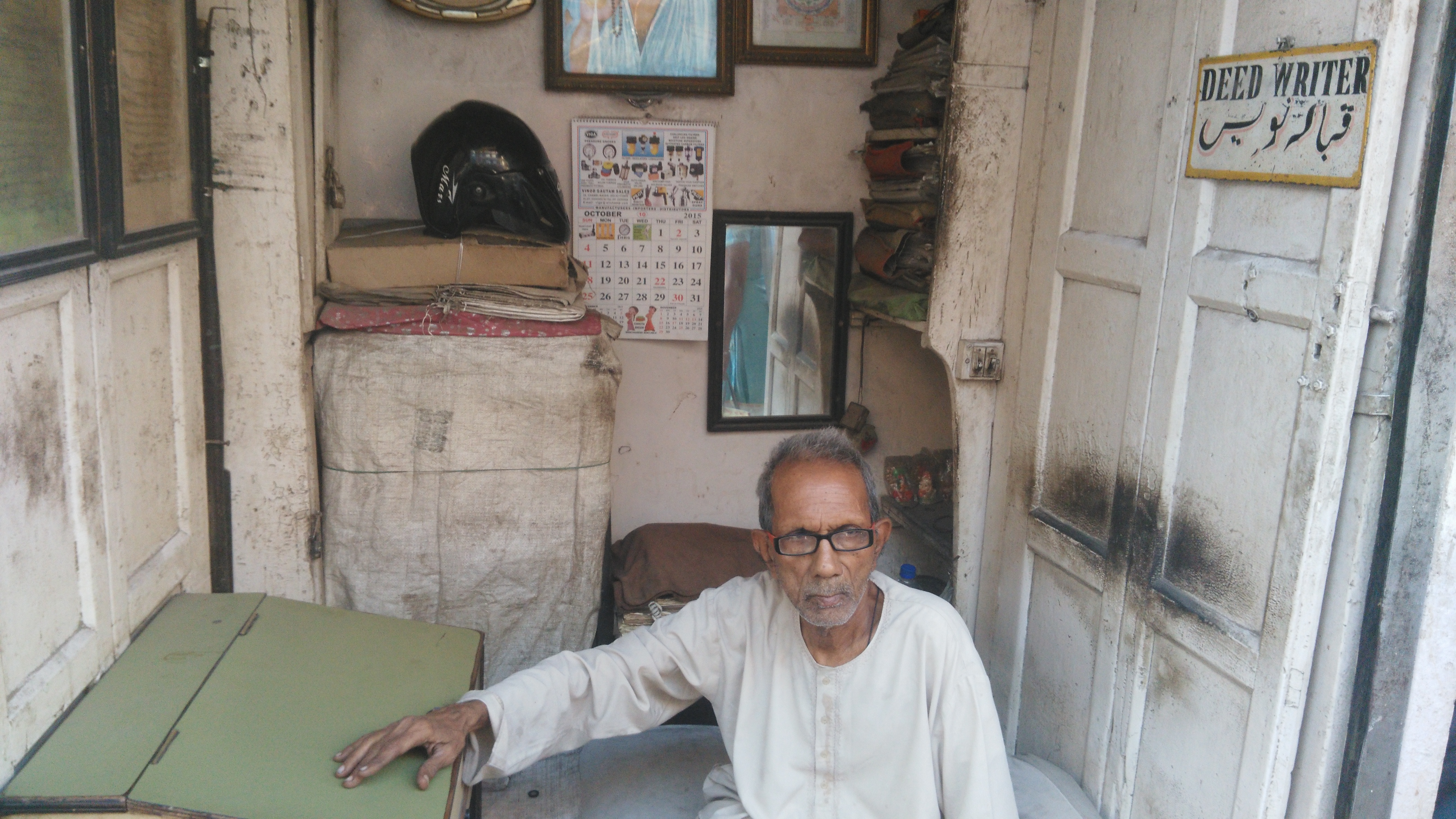 Almost immediately after exiting the Chawri Bazaar Metro Station at the Hauz Qazi exit, right next to the Ashok Chaat corner, one can find Delhi’s aakhri qabala navees or the last deed writer.

In the old days, before the adoption of an English legal system and framework, qabala navees used to draw up property and marriage deeds in Urdu. The tiny single room cell-like offices (with just enough room for one writing desk) of the qabala navees used to be stacked from the floor till the ceiling with scrolls pertaining to the rules, formats and guidelines of preparing different types of deeds.

Basant Narayan Satya Narayan Saxeni operates out of a small single room but the business is no longer the same. Nor is it as robust as it once was. Basant Narayan’s card identifies him as a “dockuments writer”. These days, Basant Narayan doesn’t draw up deeds but only translates English court documents into Urdu for the benefit of those purani dilliwallahs (Old Delhi residents) who don’t know English.

Basant Narayan is 88 years old. He has two sons but both of them are pursuing software engineering. Nine generations of Basant Narayan’s family have been deed writers in Shahjahanabad but no more.

Sometime in the 1650s, Mughal Emperor Shah Jahan wrote to Mirza Raja Jai Singh of Amber, asking him to send him some deed writers for the newly built city of Shahjahanabad. Raja Jai Singh promptly sent Basant Narayan’s ancestors to Shahjahanabad where they have remained ever since.

Below his desk, Basant Narayan keeps two albums. One is of clippings of news articles about him. The second album consists mostly of his photographs with foreigners. There is little work during the day so Basant Narayan is more than happy to share chai (tea) and idle chit chat. For an 88-year-old man, Basant Narayan’s speech is peppered with the choicest Hindi swear words, a way of talking that invariably makes nearby shopkeepers and thelawallahs (hawkers) snicker. Basant Narayan talks of many things but the one topic he always returns to is his passport.

“Passport toh un logon ke liye hai jo apna mulk chodna chahte hain. Mujhe toh kabhi bahar jaana nahi toh main passport leke kya karunga?” (Passport is for those people who want to leave their country. I will never leave India so what use do I have for a passport?).