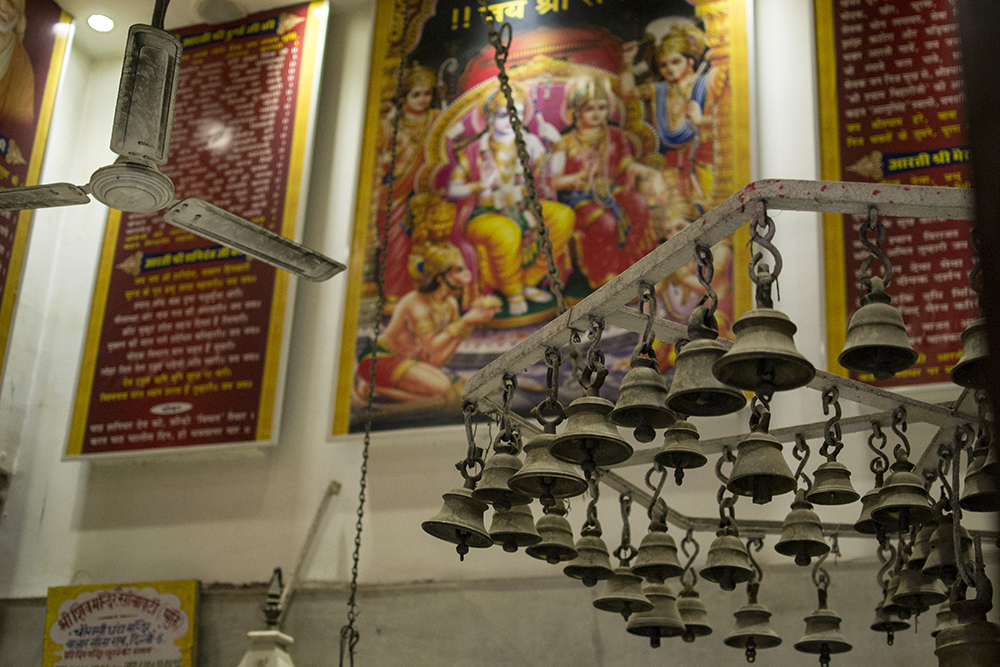 One of the lanes originating from Hauz Qazi Chowk leads to Sitaram Bazaar. It is a market mostly populated by the Hindu community and is famous for a number of temples that one can spot on the roadside, every 10 steps.

Nestled in the bustling bylanes of Sitaram Bazaar in Old Delhi, amid the constant chaos and myriad tellings of new age India stands a quiet testimony of history and culture, the Chaurasi Ghanta Mandir or The temple of 84 bells. In a city where multiple civilizations have left their mark in almost every bylane, what makes this temple so special is the story that surrounds it. 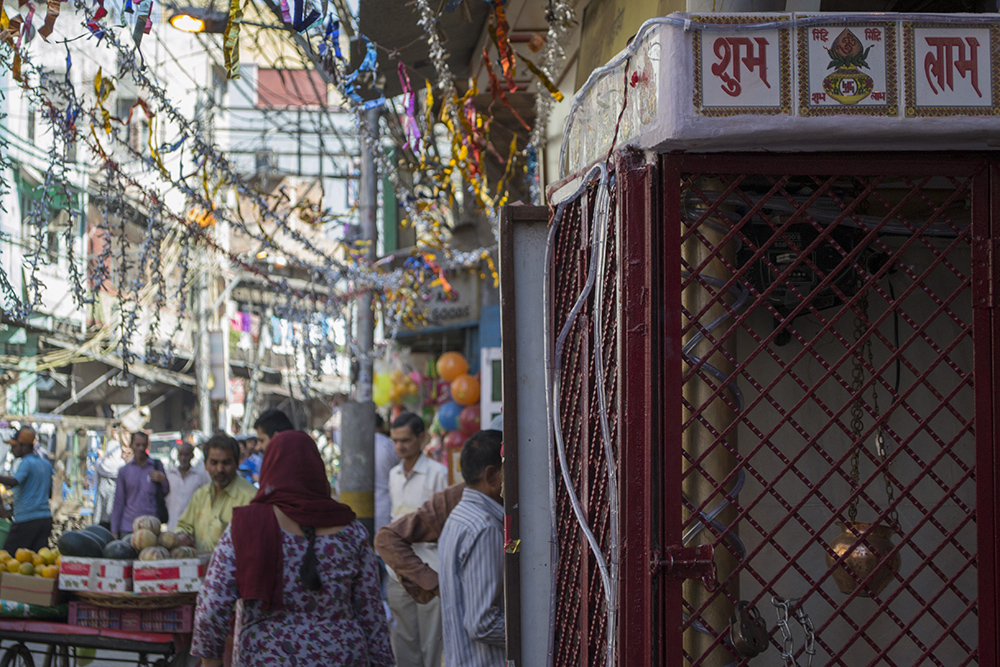 No one actually knows how old the 84 bells are but they represent the 84 lakh cycles of birth that one is said to go through to attain rebirth as a human being. The bells are all tied with a single chain, leading to one lose end. When the lose end is pulled, all the 84 bells chime together. The temple is home to the idols of Hindu Gods Hanuman, Ganesha , Shiv and even Sai Baba. 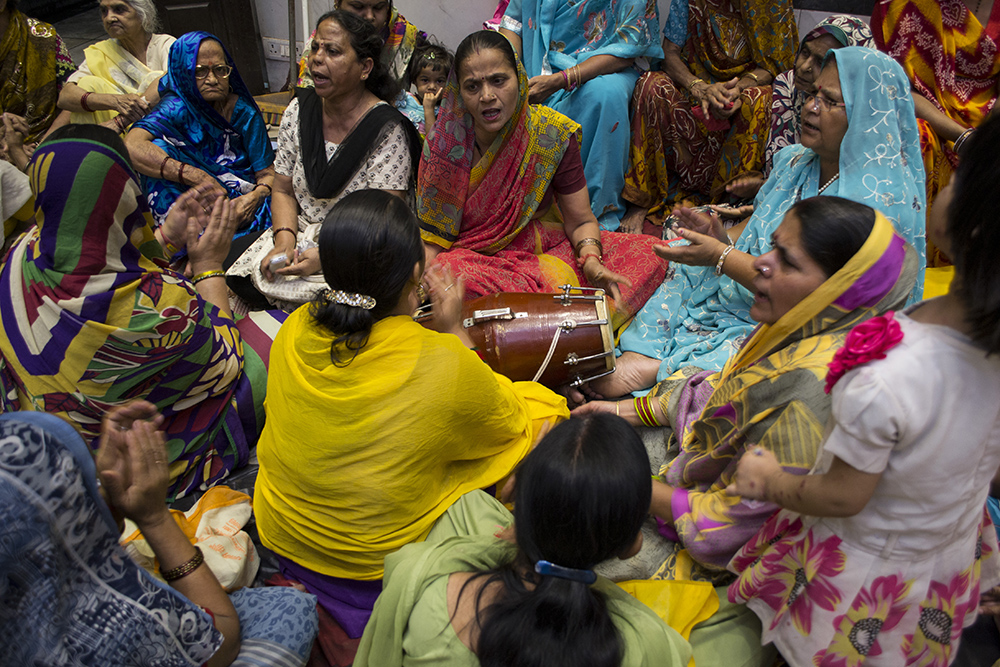 Every Thursday evening before the aarti, women of the area gather to sing in praise of the gods.

According to the local caretaker and chief priest, the exact date of the temple is disputed but it goes back at least 200 to 300 years. Basis the local legend the land on which the temple was built was originally a graveyard on which a revered entity of Lord Shiva—Shiv Ling—emerged. Locals sought this as a miracle and began praying to it, soon after word of this mysterious miraculous Shiv Ling spread and some local priests came to see it.

There are different versions explaining the origin of the temple. Some say that the Shiva Linga, the icon of Lord Shiva, appeared on its own on the site, which was once a graveyard, and so a temple was built around it. It is also rumoured that even the idol of Hanuman magically appeared on the site on day. According to the Hindu tradition, the unexplained appearance of an icon of a deity is called “Swayam bhuprakat”.

It is believed that one Lala Sitaram, who owned the market around the temple place, donated a large sum of money for the construction of the temple. One of the local priests declared that he would arrange for a temple to be built and every time a prayer would be answered, a bell would be donated and rung. The temple walls are made of white stones and are decorated with religious scriptures and paintings, depicting important events from the Hindu mythology. The temple is under the care of a Sharma family for many generations now. The male members of the family take turns to serve as pandits (priests) for 10 days at a time, after which another family member takes over. 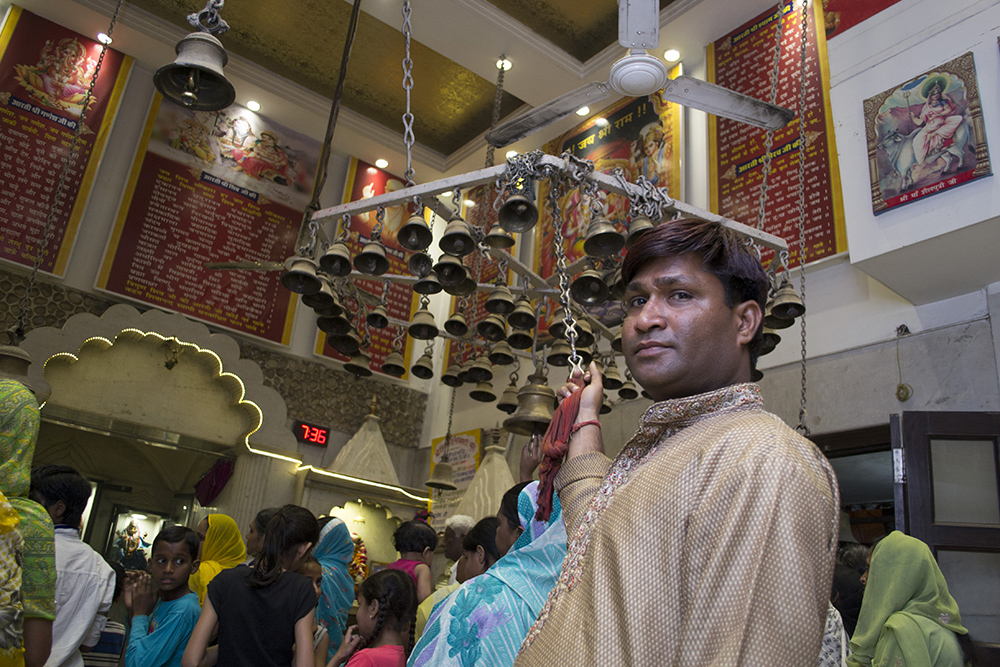 Shankar Sharma is the 4th generation from his family serving as a pandit.

The legend of the temple started spreading and a number of patrons flocked and started the tradition of ringing a bell at the ‘Temple of 84 bells’. This tradition continues till today, surviving almost 300 years where staunch believers flock to pray and ring one of the holy bells. Patrons believe that if they have a ‘mannat’ or a ‘wish’, praying at the holy temple would result in its fulfillment; once fulfilled, the believer will return to ring the bell or donate a new one.

According to the local priests, while most of the bells have been replaced over time, there are still some wonderful remnants of its original structure, including the revered centuries old Shiv Ling. Modelled on regular temples, it houses multiple deities but what’s fascinating is the tranquility and quiet that engulfs the space. 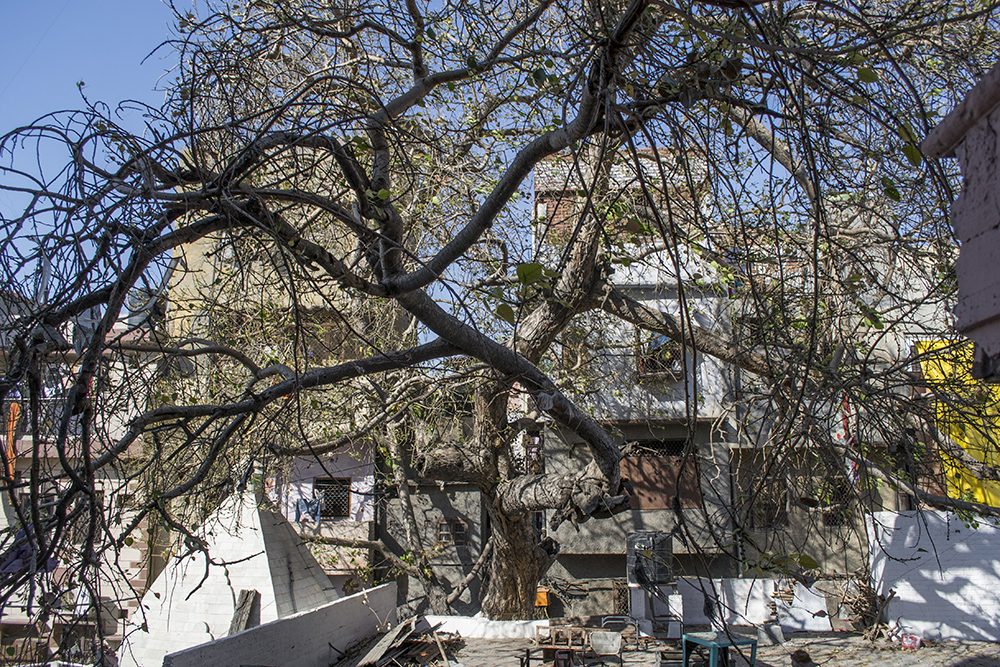 A peepal tree behind the temple is said to be the home of 88 crore gods and goddesses.

What makes this temple a must visit for locals & tourists alike is the opportunity to revisit a piece of history right in the middle of modern day Delhi. As is the case with most of the popular temples, this temple, too, is surrounded by shops selling sweets, flowers, idols, clothes for idols and paintings of Hindu Gods, besides other offerings to God. Although the market is mostly quiet during the day, it becomes lively by evening as the time for regular evening prayer ceremony (aarti) approaches.

Mubeen Siddiqui and the Global Shapers – New Delhi Hub have contributed to this page.