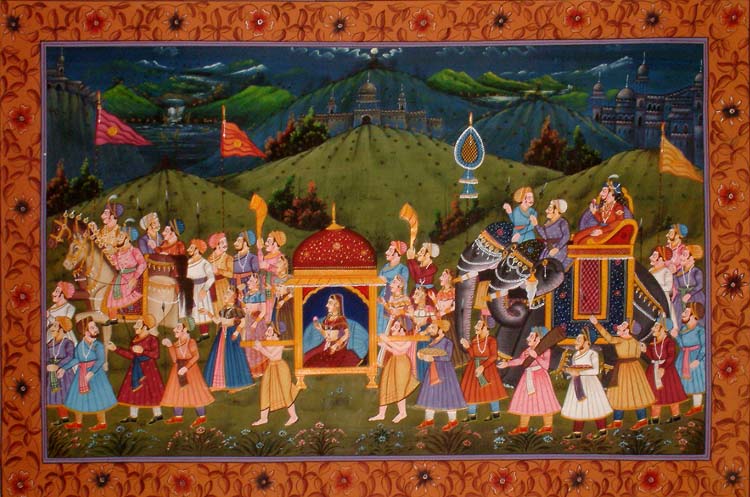 During the Mughal era, people used to commute mostly by foot as carts were meant for commercial purposes and for transportation of groceries. Only the most affluent persons could afford a vehicle for their convenience.

Among these luxury conveyances were palkis, a type of palanquin with long bamboo sticks carried by two men called kohars. Upper-class women and members of the court used them to get around the streets of Old Delhi. The existence of palkis continued until the mid-19th century. It has, for instance, been reported that renowned poet Mirza Ghalib arrived in one such palanquins for his first day as professor of Delhi College.

To cover longer distances, Mughal emperors and their court mainly rode on horses or travelled in horse carriages.

Though Emperor Shah Jahan had moved the Mughal Capital from Agra to Delhi, the former city remained an important political centre and the Mughal emperor used to commute between the two cities quite regularly. Consequently, the road was relatively well maintained for the royal convey. At each milestone on the way was a small relay station where the emperor would get a new set of horses and water. A man sitting on top of the relay station would play drums as soon as he could see the court on the road to alert the rest of the station guards about the emperor’s arrival. Thanks to this system, the court could complete the journey in one day, starting from Delhi early morning and reaching Agra in the late evening.

Of course, this type of luxurious and convenient journeys was reserved to the elites of the society while common people could only consider far more time-consuming options. Indeed, as late as in 1910, it took more than a day to travel from Timarpur (located close to the present day Delhi University) to Okhla (about 20 kilometres away) by bullock cart. One used to leave early in the morning and had to stop at Nizamuddin for the night, reaching Okhla only after two or three more hours of travel the next morning.

Rise and fall of the tongas

Alongside palkis, tongas (horse carriages) were introduced in Old Delhi during the reign of Muhammad Shah in the early 18th century. These horse carriages were initially owned by middle and upper class families and demonstrated social affluence. Families used to keep tongas in the courtyard of their havelis; most of these ancient houses still possess an emplacement for the horse stables. Tongas were used to commute in the city, and also to go on short tours outside the walls of Old Delhi.

However, with time —  and more specifically after Independence — the use of tongas changed. Though the ancient privately-owned model remained in the form of ‘baghi’ (a grander horse carriage), most of the tongas in Old Delhi were now owned by tongawallas and plied through fixed routes across the city. The carriages were commuting between different tonga stables across the city, the most important of them being located in Turkman Gate, Ajmeri Gate, Pahar Ganj, Tis Hazari, Daryaganj and at the railway stations. The use of tongas was very widespread in the Walled City as it constituted a convenient and cheap mode of transportation. People used to pay around 4 anas (a quarter of a rupee) for a fare shared with four or five other passengers. Smaller forms of tongas pulled by ponies, called hekkas, were also found in narrow streets.

A tonga in old Delhi carrying Dr. Rajender Prasad, the first president of Republic of India. The tram tracks can be spotted on bottom right. Credit: wikimedia

Tongas constituted an iconic part of Old Delhi’s identity. Every year in November, the tongawalla communities organised a race across Old Delhi. Each of them used to appoint a special carriage – lighter and with bigger wheels – and a race horse for the occasion, which was very popular among Old Delhi residents.

Tongas had been carrying people within the walls of the city for more than three centuries until they were banned in 2010. The introduction of cycle rickshaws in the mid-1950s had slowly led to the decline of horse-driven carriages but they remained commonly in use on certain roads between Turkman Gate, Paharganj and Sadar Bazaar. It was after a decision of the Municipal Corporation of Delhi to not renew the tongawallas’ licenses and raze tonga stables that they finally disappeared from Old Delhi’s urban landscape. At this time, they were still more than 200 licensed tongawallas in activity in Delhi. However, a few of them continue to operate around Turkman Gate and Daryaganj.

The 20th century: From trams to phat-phatis, from trains to the underground

From the beginning of the 20th century, tongas slowly had the spotlight stolen by new sorts of modes of transport. Most iconic of them was the tramway, which ran between 1906 and 1963 and soon became one of the most popular mode of transportation for Old Delhi inhabitants. The tram used to ply along two lines, a shorter and a larger route, both of them meeting in Chandni Chowk. The travel speed was quite slow due to the congestion in the area and people could jump on and off running coaches. Trams had three classes for which the fare varied between 1 and 4 anas, depending on the length of the ride.

The tram route of Old Delhi.

Trams plied only inside old parts of Delhi though, and, with the expansion of the new Capital towards the south, new modes of transportation emerged to enable Old Delhi inhabitants reach other parts of the city. Shortly after Independence, some drivers came across a stock of Harley Davidson motorbikes that had been used during the Second World War and were left in a military storage house in Delhi. The motorbikes were soon transformed into three-wheelers designed to transport six to eight passengers at a time. These “phat-phatis”, so called because of the characteristic — and quite loud — sound of their motors, were used to connect Old Delhi to New Delhi. They ran on a fixed route, starting from Chandni Chowk fountain and reaching Connaught Place Coffee House through Daryaganj. Later, additional routes were set up towards Karol Bagh and Gandhi Nagar on the other side of the Yamuna. However, a 1998 ruling of the Supreme Court against the use of polluting vehicles signed the death warrant of Delhi’s phat-phatis.

Apart from these inner evolutions in the inhabitants’ modes of transport, one of the major changes Old Delhi experienced was caused by the introduction of the railway system in 1964. The construction of Delhi Junction — most commonly known as Old Delhi Railway Station — transformed deeply the entire urban configuration. Once must also not forget that the construction of the line took place only seven years after the 1857 revolt, an event that strongly impacted the decision and design processes for the new railway system.

Initially, the British opposed the idea to connect Delhi with the train system because they wanted to isolate it from the rest of the country and punish the inhabitants for the revolt. However, Old Delhi merchants and businessmen managed to persuade the British of the economic advantages the railway system would bring to the entire city. The construction of a Calcutta-Delhi line, which had already been considered before the revolt, was finally approved in 1959. On the August 1, 1964, the first commercial train from Howrah reached Delhi Junction after having being ferried across Allahabad – the bridge over the Yamuna was not built yet.

Interstingly, a railway line was first laid in Old Delhi, connecting the Mumbai Terminal to the Laal Qila or the Red Fort, fo King George V who briefly stayed in Delhi before continuing his journey to Calcutta (now Kolkata) for his coronation as King-Emperor of India in 1912. Post-Independence, this railway track was diverted away from the fort and to the Old Delhi Railway Station.

The construction of Delhi Junction took two more years and was achieved in 1966. The building was partially constructed on the site of Begum ka Bagh, the royal gardens commissioned by Jahanara, Shah Jahan’s favourite daughter. The Mahatma Gandhi Park is now the only remains of these immense and luxurious gardens where royal ladies and women of the court used to come for recreation and amusement. Parts of the Red Fort wall and Saleemgarh were also destroyed to allow the installation of rails, though the line could have been shifted further north.

The new configuration of the railway virtually cut the city in two parts. The southern one, around Chandni Chowk, remained inhabited exclusively by Indians while the British settled in the northern parts around Kashmiri Gate and further expanded the city towards Civil Lines. The railway station became the new core of the city, thanks to the design of the new North/South axis between Nai Sarak, Town Hall and the Delhi Junction.

The station itself was designed like a fort. The original building of 1866 was only a two-floor building designed for hundreds of daily passengers but, due to the rapid increase of the railway transit, a new building had to be built in 1903. Though its architecture is inspired by Mughal style elements, the primary concern at the time was to build it so as it could serve as a defensive place in case of civil unrest in Old Delhi. The two turrets of the station were designed so that small canons or muskets could be placed in every floor. Thankfully, none of those had to be used in the following years. On the contrary, Delhi Junction increasingly became an essential hub for all types of commercial and passenger transit from all over India, and this, even after the construction of the adjacent New Delhi Station. Today, over 240 trains convey daily through Delhi Junction, representing a flow of over 2,00,000 passengers.

Today, travelling within Delhi has changed drastically with the introduction of the Delhi Metro. The first line was inaugurated on December 24, 2002, and ran between Tis Hazari and Shahdara through Kashmiri Gate, covering around a distance of around eight kilometres. The Metro system reached Old Delhi in 2005 with the opening of the Yellow Line section between Kashmiri Gate and Central Secretariat. It was the first underground section to be built and, to date, Chawri Bazar remains the deepest station in Delhi, close to 30 metres below ground level. All together, the Old Delhi Metro stations record an average footfall of three lakh passengers.