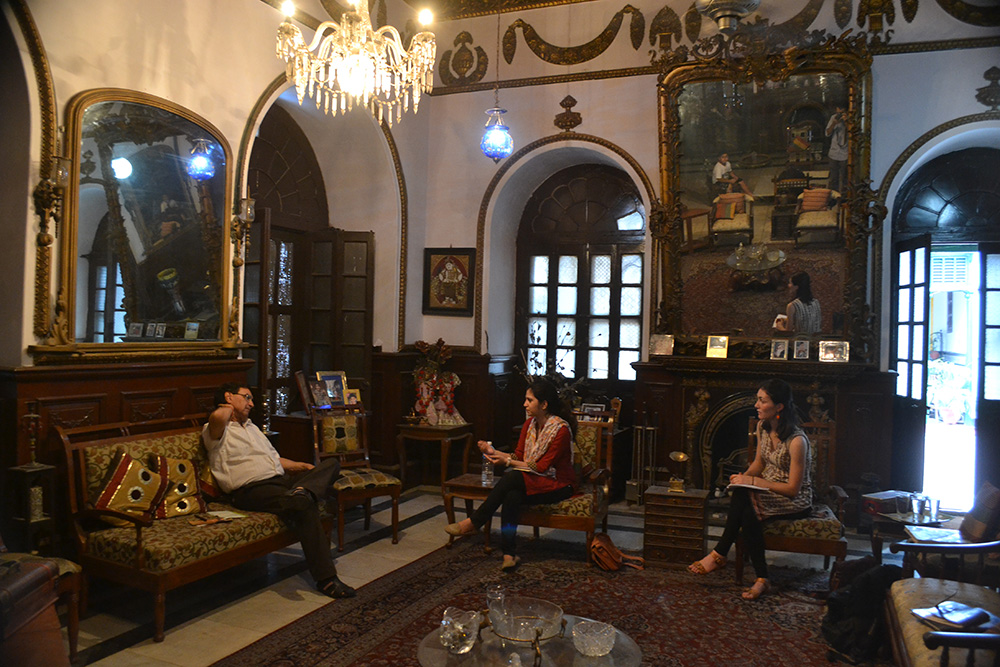 Lala Rai Chunna Mal was a well-known moneylender (who even loaned money to British officials and officers) and textile trader of Old Delhi in the 1800s, and he owned a major portion of Chandni Chowk — where he lived — and even other parts of Shahjahanabad. This made Chunna Mal one of the richest men of Old Delhi. His income, during those days, was Rs. 1 lakh, which in today’s time would be equivalent to several crores. As a friend and supporter of the British and the British Raj, Chunna Mal enjoyed many privileges, and went on to become the first Municipal Commissioner and Honorary Judge of Old Delhi. He was also the first person in Shahjahanabad to own a car, a phone and have electricity connection in his house.

Chunna Mal’s Haveli is still a landmark in Chandni Chowk but its exteriors are in a slightly dilapidated condition with rusted tin sheds, paint chipping off from the facade, windows dangling from the top floor, electric wires hanging loose over the haveli, rickshaw pullers crowding in front of it, and hoardings partially blocking the mansion’s view for the traffic below. Adding to these woes is the stench from a public urinal right in front of the mansion’s gate.

Once inside, the scene is completely different. It doesn’t look like a dilapidating building but has been, in fact, well maintained. One is welcomed into the haveli with a brass handrail on either side of the staircase, which leads the guest to a trisection with an ancient mirror with a beautifully carved golden frame at the end. It is believed that the haveli originally had 130 rooms. Most of them have been divided into tiny rented shops on the ground floor today, each of them liable to pay only Rs. 70 a month even today, courtesy rent control in Old Delhi.

The present co-owner of the house, Mr. Anil Pershad, has well maintained a portion of the house. Pershad is the sixth generation of Lala Rai Chunna Mal, and lives with his wife, son, daughter-in-law and grandchildren in the haveli. Over the years, the rooms on the first floor (where the family resides) have been modified for artificial cooling and additional storage space but in the courtyard, one can see tiles, carvings and woodwork that date back to the 19th century. However, the room that steals the show is the drawing room.

This room has been kept as it was when Chunna Mal was alive. Mirrors, photo frames, fireplaces, wooden shelves and sofa all speak volumes about the wealth and taste of Lala Chunna Mal. A Persian inscription — that dates back to 1854 — in the wall, in fact, praises Chunna Mal’s haveli, saying it’s so pretty that it can even put the heaven to shame.

A Persian inscription praises Chunna Mal’s haveli, saying it’s so pretty that it can even put the heaven to shame.

The carvings on the top of the wall are painted in the same colours as they were over 150 years ago. Interestingly, to ensure that the blue colour on the carvings look as original as ever, the owner gets it painted in Neel (a blue-coloured solution commonly used in India for whitening clothes). The drawing room also has a large chandelier (one-tenth of its original size) in the centre. The original chandelier was so huge that later generations divided it into multiple chandeliers for the different rooms of the haveli. Meanwhile, electrical fittings have been added to the kerosene lamps in the chandelier to accommodate bulbs.

Some years ago, however, the original ceiling of the drawing room fell. Pershad went around the city and the country, looking for similar ceiling carvings “but nothing could match the beauty of the original ceiling”, so he got the ceiling covered in red chunari fabric. It is interesting to note that the little additions in the room, in the form of furniture and show-pieces, only add to the beauty of the room without taking away the originality and essence of the room.

Unfortunately, large parts of the house have also been kept locked for years due to a family dispute over the property. Not everyone in the once joint family was as eager as Pershad and his family to continue to live in the haveli.

Unfortunately, large parts of the house have also been kept locked for years due to a family dispute over the property.

Chunna Mal came from a large family. Many of his relatives were settled in Lahore, Farakkabad Kanpur and other parts of the country.

Following the mutiny of 1857, the British confiscated most of the properties in Shajahanabad, including the Jama Masjid, and the city was under a siege. Later, when the siege was lifted, the British began to sell the properties to the people of Old Delhi. At that time, the rich Chunna Mal bought a lot of properties, including the haveli of a Mughal princess and the Fatehpuri Masjid, and later gave them away or sold them to the people of Old Delhi or their rightful owners. When locals questioned how a Hindu man could own a masjid, Chunna Mal replied, “If I can own temples, why not mosques?” Legend has it that Chunna Mal never interfered in the functioning of the mosque after buying it, he just had one condition: “There should be no cow slaughter in the mosque.”

View of Chandni Chowk Market from the roof of the haveli

Today, Chunna Mal ki Haveli has lost its glory and sheen amid the ever-crowded Chandni Chowk where there seems to be no end to pollution, trash and construction. However, unlike the many havelis of Old Delhi, people recognise this one and can guide tourists and heritage enthusiasts to it.