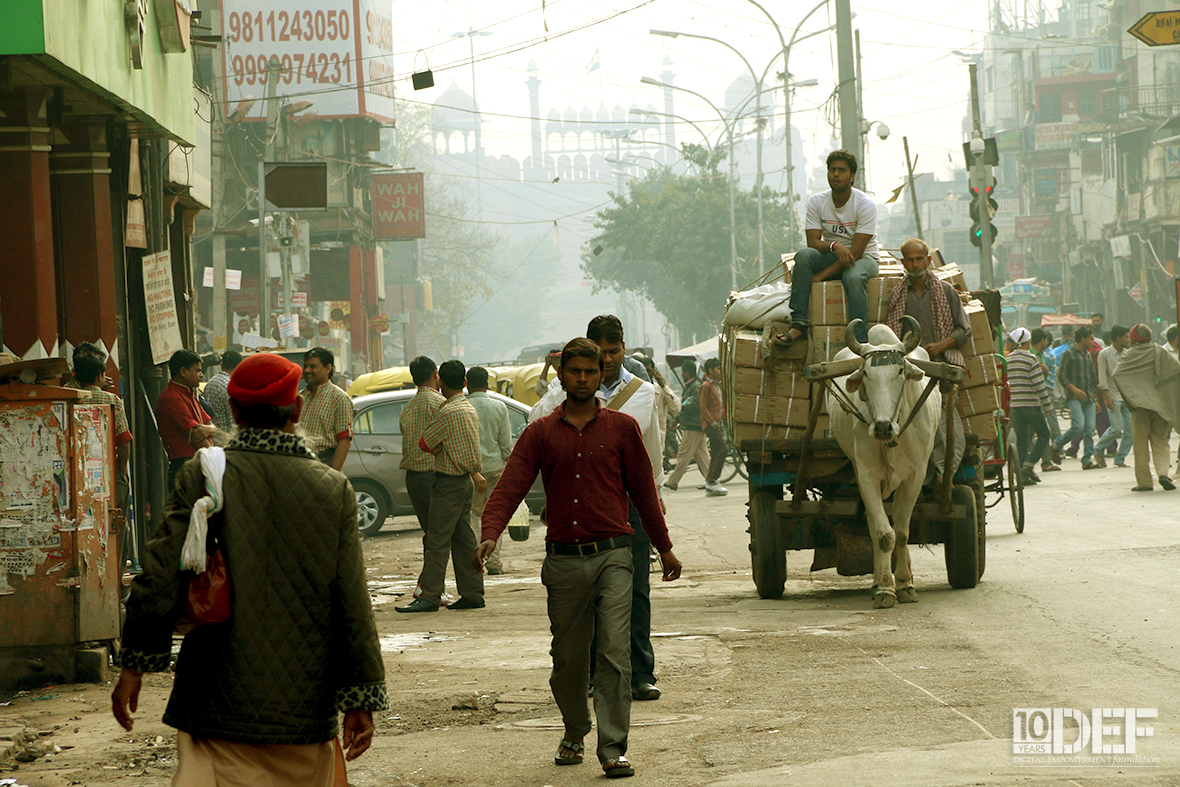 Chandni chowk, one of the biggest commercial centres of the east, is a world in itself. Its bazaars, galis, mohallas, katras and koochas are anchored in a bygone era.

Chandni Chowk was originally built as an open octagonal space located outside Begum Bagh (Queen’s Garden). A tributary of Yamuna passed down the middle of the street and formed a pool that reflected the moon and, thus, the square came to be named as Chandni Chowk.

Chandni Chowk has the roots of India’s culture and the essence of what is known today as the Ganga-Jamuna tehzeeb. Chandni Chowk, as it existed a couple of hundred years ago, was a street made of bazaars with a row of banyan trees down the centre and the silver ribbon of the flowing canal flanked by a wide platform where people sat and conversed. Horse driven carriages, palanquins and elephants passed through the streets. The chowk was at par with the world’s best known squares such as Tiannamen Square in China or New York’s Times Square. It is also one of the few roads in the world that has monuments dedicated to different faiths — Digambar Jain Lal Mandir, Gauri-Shankar Mandir, Arya Samaj Diwan Hall, Central Baptist Church, Gurdwara Sis Ganj Sahib and the Fatehpuri Masjid.

During the Mughal period, the quarters of the Walled City were divided on the basis of different guilds. Localities inhibited on the basis of specialised professions were Katra Neel, Lal Kuan, Sita Ram Bazaar and Chatta Lal Miyan, among others.

One road, one-way and one market would be the best way to define Chandni Chowk. The area is a perfect example of religious harmony. It will not be wrong to say that if all religions were flowers they could be weaved together in a garland called Chandni Chowk.

Upon entering Chandni Chowk, the first thing one can see is a Jain Temple. The temple was built for Jain soldiers during the reign of Shah Jahan. Earlier, the temple was a Laskari temple. Later, a Jain soldier put an idol there for his personal worship and a structure came up. Outside the temple, is a hoard of cycle rickshaw pullers who shout and call out Fatehpuri, Ballimaran and Town Hall, among others, attracting commuters. Earlier, only man-pedaled rickshaws were found in the area but now battery-charged rickshaws are also available in the area.

At the entrance of Chandni Chowk, on the right hand side, sits a jalebiwala who makes jalebis in desi ghee and serves it with rabri for Rs. 60.

One can also find “Fawwara Lord Nath Barolle” —most locals are unable to pronounce the name of the former Viceroy of India Lord Northbrooke — (1872-76) in front of the kotwali in Chandni Chowk. This splendid and attractive fountain (fawwara) dates back to the time of Lord Nath Barolle. At that time, the cost of building the fountain was Rs. 10,000, which explain its beautiful structure and intricate carvings.