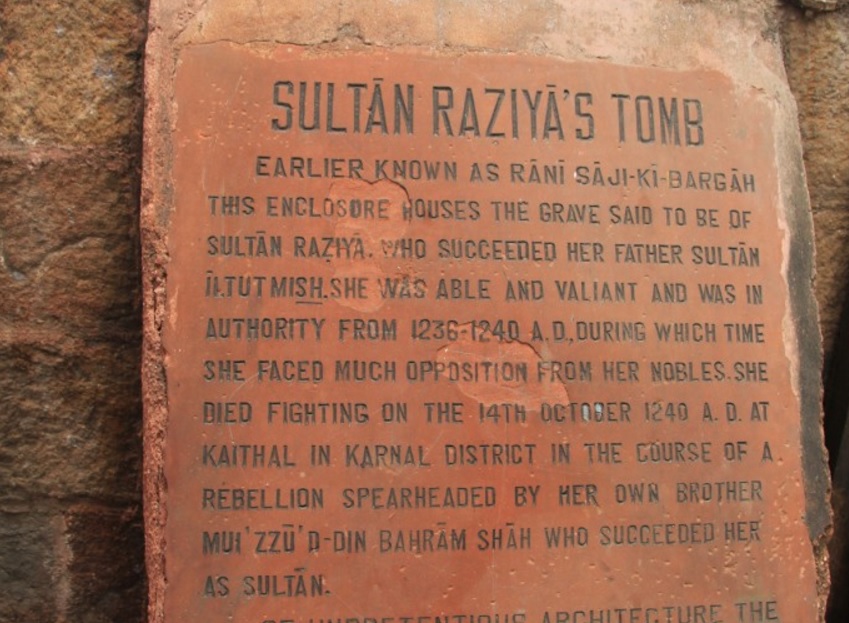 In the busy lanes of Chawri Bazaar, there is history and folklore at every step that is waiting to be discovered. In fact, you come to expect centuries old stories to spring at you everywhere, when you set out exploring in this area. But even then, we were unprepared to encounter what we saw next: the mausoleum of the first woman ruler of Delhi, Razia Sultan in an unassuming forgotten corner, a silent spot in the usual hustle and bustle of old Delhi.

At the dead end of Bulbul-i-Khan, near the Turkman gate lie two graves; of Razia Sultan and a man rumoured to be her childhood best friend, lover and a co-fighter—Malik Ikhtiar-ud-din Altunia—in her military campaign against her half-brother to protect her reign over the Delhi Sultanate. It is believed that they died on October 14, 1240, and were buried together. Interestingly, there is a dispute among historians on whether this is the actual site of burial or was it Kaithal in Haryana, where they died fighting. A mystery that shall remain unsolved it seems for years to come. According to philosopher Sir Syed Ahmad’s book, however, Razia’s grave was built by his brother Majuddin Behram Shah.

Razia Begum Sultan was a very affectionate and proud daughter of the Altamash dynasty. Altamas was, in fact, more fond of his daughter Razia than he was of his sons. This is why Altamas deputed his daughter as his heir to the throne, and she went on to become the ruler of Hindustan. During a war against Bhatinda’s Hakim Malik Altunia, the rich betrayed Razia, which led to her being taken captive on the battlefield. Once she was captured, Majuddin Behram Shah was replaced as the ruler. Later, Razia Begum married Altunia and fought against Behram Shah but she was killed in war in 1240 AD.

The sight of the over 750-year-old graves can silently overwhelm visitors; the importance of the sight and the sad state of neglect is ironic. To think, that Delhi’s first woman ruler’s remains would lay in a non-descript compound surrounded by houses from all four sides, which like creepers jut into your vision as you look above, is unimaginable.
This small compound also consists of a small mosque. The priest at the mosque offers regular prayers and also acts as a caretaker. The site sure is protected by Archaeological Survey of India, but centuries of civilisation after Razia Sultan’s death has moved on and built their life around these graves in a way, that it is hard to give it any more space.
This site, though not visually the most fascinating is one, is a place for reflection. Our world, which is always looking for symbols of women equality and empowerment, has forgotten the woman who embodied these principals more than 750 years ago and led with example. And if this has been forgotten, what is its legacy and how long does it stay?
A view of this sight can force you to think that a queen that was immortalised in a mainstream Bollywood movie lays here silently waiting for people to turn up at her door to applaud the mark that she left on the sands of time.

The evening azaan rings in the sky, calling out worshippers to come and offer prayers… if the queen’s grave could call all of us too to hear her story, to pay respects or even to acknowledge that she existed, she thrived, she did what was never done before and she met her end fighting courageously.

As a group traversed the serpentine lanes of Old Delhi, it caught the eye of a concerned and curious off-duty tourist guide. Unlike the often notorious, pesky guides who throng tourist locations, this one was simply volunteering to show us his neighbourhood. He took the group around the area, and showed them a mosque here and a famous tomb there, sharing stories and anecdotes from his life. He fondly remembered the time when Indian film director and screenwriter Kamal Amrohi came to visit Razia Sultana’s tomb to research and shoot for his Bollywood musical film on her.

As the group climbed the mosque’s steps, he excitedly explained the importance of a larger fourth step—to help climbers gain their breath—and wowed the group with other trivia about the mosque. He also narrated the exploits of kabootarbaz (pigeon-fighters) in the area and then proceeded to show us photographs of the latest Eid prayers in the mosque. On being asked about the mosque’s maintenance, he said, “There’s complete government apathy, most of the maintenance is community driven.” Even as he said this, he proudly showed us the re-tiled prayer hall. Clearly, here was another spirited purana-dilliwala whose anger against the authorities was outmatched by an even stronger emotion – love for his city.

Mubeen Siddiqui and Global Shapers – New Delhi Hub have contributed to this page.